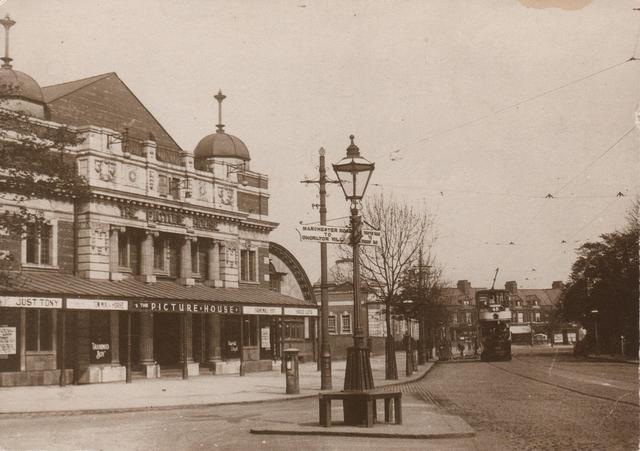 Located in the south Manchester district of Chorlton-cum-Hardy, at the corner of Manchester Road and Nicholas Road. The Picture House was originally built for an independent operator and was to be known as the New Majestic Cinema, but it was taken over by Provincial Cinematograph Theatres(PCT) chain, and opened on 8th November 1920 as the Picture House.

The Picture House was an attractive building, which had two squat domes on each side of its facade. Seating in the auditorium was provided in stalls and circle levels.

In 1921 it was leased to Savoy Cinemas and re-named Savoy Cinema. In 1928, the cinema became one of the original cinemas in the newly formed Associated British Cinemas(ABC) chain. On 25th March 1946, it was taken back by Gaumont/PCT, and was re-named Gaumont from 1st April 1946.

The Rank Organisation closed the Gaumont on 6th January 1962, playing a re-issue double bill of Doris Day in "The Pajama Game" and Guy Madison in "The Charge at Feather River".

The building was purchased by the Co-operative Society and converted into a funeral home, which continues today. The facade has been heavily altered, and inside the auditorium, the circle has been extended forward to the proscenium arch. The original ceiling is still to be seen in this upper area, which is now used to store coffins.

A vintage photograph of the Gaumont in 1958:
View link

According to BBC News, the Gaumont cinema in Chorlton was where the Gibb brothers made their live debut as The Rattlesnakes in 1957. The brothers – Barry, Robin and Maurice – were born on the Isle of Man but later moved to Keppel Road in Chorlton, where the family lived for seven years.

The cinema is proposed to be demolished and apartments built in it’s place. There is a plan to hopefully save the cinema and turn it into a musuem about The Bee Gees.