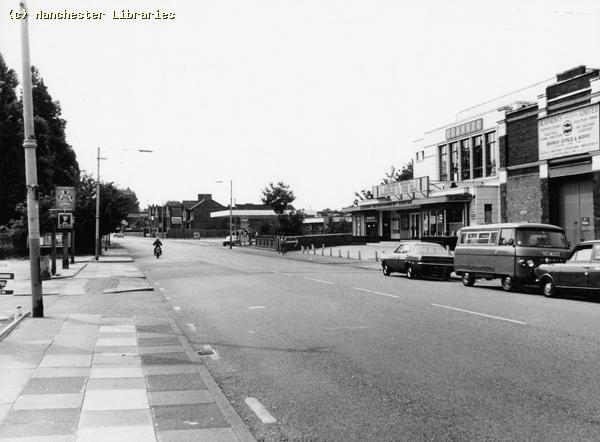 Located in south Manchester district of Chorlton-cum-Hardy. The Rivoli Cinema was opened on 20th November 1936. It was built for and operated by independent operator Ben Kanter.

Designed in an Art Deco style, seating was provided in stalls and circle levels. The Rivoli Cinema was a popular cinema, but was badly damaged by a German bombing raid in December 1940, when a bomb dropped in the street in front of the cinema, removing the front of the building. It was requisitioned by the Government and used for the remainder of World War II as a food store.

It re-opened as the Shalimar Cinema, screening Asian Bollywood films in the former Screen 1. This was closed in 1982. The building was demolished and shops were built on the site. Today occupied by a Blockbuster Video store and a KFC Restaurant.

A vintage 1958 photograph of the Essoldo, with its rebuilt facade:
View link

I started going to this cinema back in 1974 , then it was still the Classic in the eight years since it closed i saw many many films ,it was still a good cinema back in the late seventies ,but when new owners told over it The Shalimar within a couple of years needed to spend money on the general up keep of the building a nice picture house in its day ,but lack of investment in the cinema it closed . The Shalimar suffered the fate of other cinemas in south Manchester like the Sale Odeon the Palace in Levenshulme and the Burnage Concord at the end of 1984/new year of 1985 there were not many cinemas left in south Manchester , you had to travel in city centre or in to Stockport. Yours Robert Kincaid