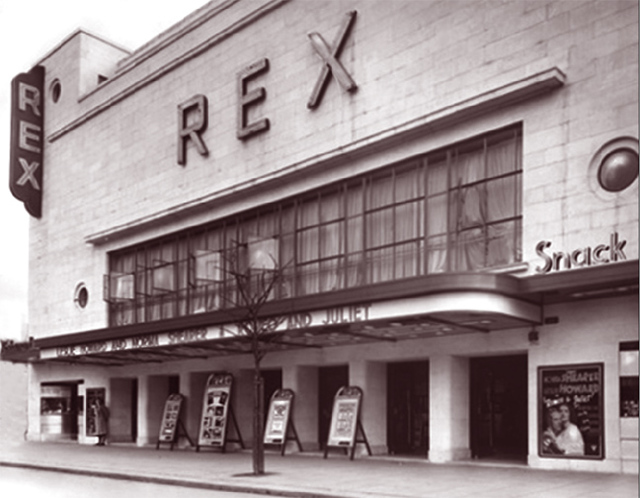 Located in the city centre, the Rex Cinema was built for and operated by the local independent Philpot Circuit. It was opened on 8th February 1937 with Clarke Gable in “San Francisco”, and had a wide frontage, with five sets of windows over the central section, on top of which were the letters REX.

The auditorium was decorated in a modern style, with coves containing concealed lighting across the ceiling, and decorative grilles on the side splay walls beside the 65 feet wide proscenium. Seating was provided in stalls and circle levels and there was a small stage. The Rex Cinema was equipped with a Wurlitzer 3Manual/6Ranks organ, which was due to be opened by Reginald Dixon, who was reported unwell, so he was replaced by organist Arthur Aikman. Additional facilites were a restaurant which had an aviary stocked with brightly coloured tropical birds, a snack bar which had a frieze containing caricatures of famous film stars of the day, and a banqueting hall.

The Rex Cinema became the head office of the Philpot Circuit. The Rex Cinema was damaged in a German air raid on 25th August 1940, and it was closed. On 2nd November 1940, the building was totally destroyed by German bombs.

The site was used as a temporary outdoor market for many years until shops were built on the site, with Boots the Chemists being the main occupier today.

British Movietone News, 1937 recording of the opening of the Rex Cinema, Coventry:
http://www.youtube.com/watch?v=KyCqS5k028c

This video is no longer available for viewing.

This was a beautiful cinema and a tragic loss. So young too.

To see the opening night click this link:– http://oldcoventryonfilm.vidmeup.com/view?q=4f1c061f20211.flv