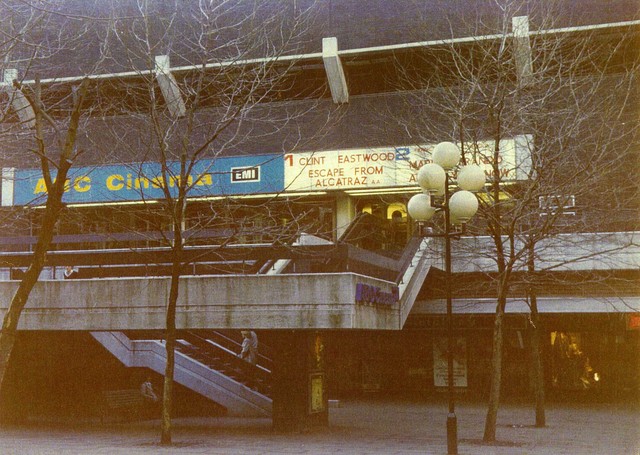 The ABC Coventry was built to replace the old ABC Empire Cinema (which has its own page on Cinema Treasures) when the new pedestrianised precinct in Hertford Street was built. Opening on the 24th May 1973 with Glenda Jackson & Peter Finch in “Bequest to the Nation”.

It was built above the new parade of shops and maybe suffered a little because of this. Strangely for this period of time, it was built as a single screen unit, but had a very comfortable stadium style auditorium with 840 seats and full 70mm projection facilities on a large screen with the curtains sweeping round the side walls as in the ABC Cinemas in Sheffield and Doncaster. There was also a small Licensed Bar off the foyer which was converted into ABC 2, opening on 20th October 1977 with 86 seats. A new projection room had to be built for this screen (periscope projection) and this meant a small corner of seating was lost in the main auditorium to accommodate this (on the right hand side looking from the screen).

The ABC Coventry had a relatively short life. It was taken over by the Cannon Group in May 1986 and by early 1987 had been re-named Cannon. Closed as the Cannon 1 & 2 on 21st April 1988, the building lay empty and unused for many months. The building is now a sports shop.

A vintage photograph of the ABC, taken during opened week in May 1973:
View link

Not a bad cinema, but the most awkward to get to, being located in a very large mall, with no parking near, this I would think, was it`s very quick demise. Had the pleasure of being the very first customer, when it twinned, a smallish screen, with the dreaded periscope system. I chanced to meet the bigwigs of abc @ the time and they could see I was most interested in the running of it all, of course, I was, I was in the same game, I got to meet the chief and crew, and was taken on a tour. Screen 2 had Phillips dp70 projectors with water cooled gates but cannot remember what screen 1 had in it, but, I do remember seeing “Killer bees” or was it “Swarm” anyway. it was in scope, with a huge screen. I think s2 opened with “Taxi driver”.

The Projectors in Both Screens was Phillips DP75.. Screen 2 was only mono sound.. DP70’s where not fitted, as they where a very expensive system.. I received a memo just before the Cinema Opened. The Wage offered was a basic of £2,000 pa.. The company knew how to spoil us :o)

Sorry Mike, maybe my mind eye is playing tricks on me, but, I do remember the day very well, it was a long time ago, but @ least I got the Phillips bit right. I remember when Classic took it over, as I was working for them @ the time, and considered having a go, but Banbury, tugged @ at the strings too much. May I enquire as to who you worked for?

@ Sisu. (The DB 70 was an extremely heavy piece of Kit which was a pain in the neck to move around. I was involved with the removal of the Gaumont Birmingham’s) I did 68 till 1974 with ABC… Then went Independant. then BT Davis’s General Manager and shareholder. This was part of “Theatre Administration Ltd., which had the Cinemas in Leamington and around another 20 Theatres around the country.. I was involved in dealing in Projection equipment on the side :o) My Last Theatre was Savoy Monmouth retiring 2007 Hmm 39 years.. Paid years.. Family involved in owning theatres from 1880..