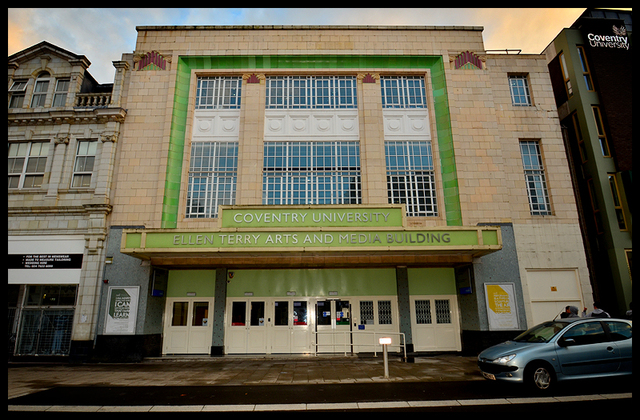 The Gaumont Palace opened on 5th October 1931 with George Arliss in “The Millionaire” and Constance Carpenter in “Brown Sugar”. This vast cinema had an entrance on Jordon Well, and a separate entrance to the front stalls on Whitefriars Street. The building incorporated the former Coliseum Ballroom & Cafe, which was converted into the Gaumont Palace Ballroom. There were also two cafe’s in the building, one for the cinema, and the other for the ballroom.

Seating was provided in stalls and circle levels. There was a huge 85 feet diameter dome in the centre of the ceiling which contained the projection box port-holes. The 52 feet wide proscenium had a gentle curve, and contained three troughs of concealed lighting. The Gaumont Palace was equipped with a Compton 3Manual/9Ranks organ which was opened by organist Leslie James.

It was re-named Gaumont on 19th January 1937. Closed on 14th November 1940 due to damage from German bombs, it was repaired and re-opened. It was fully restored and redecorated in 1949, to the plans of architect Harry Weedon.

Screen’s 4 & 5 opened in February 1990 using the former front stalls with 390 seats, and a former cafe area with 121 seats. The Odeon was closed in October 1999, after the new 9-screen Odeon multiplex opened in the Sky Dome Leisure Centre.

A slide-show of vintage photographs of the Gaumont Palace:
http://www.youtube.com/watch?v=C_uanghviwU&NR=1

Another photo taken whilst still a cinema:–