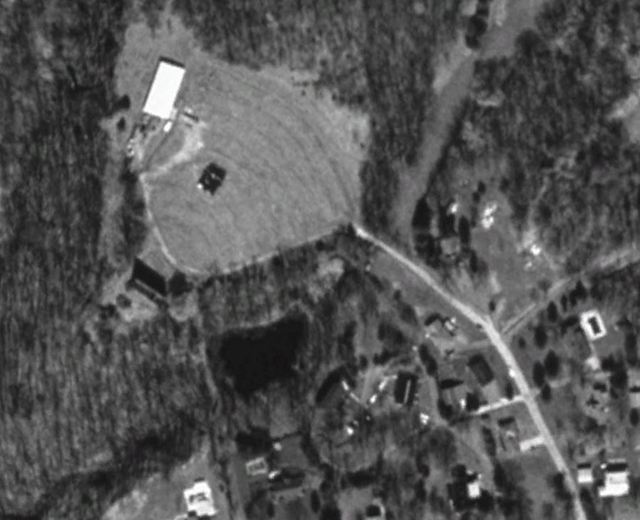 “CLASS of ‘44” playing here with “BULLITT” second feature.Can’t make this stuff up!

Although I cannot be certain, it appears from the aerial photos that the screen or at least part of it is still standing.

Using Bing Maps Aerial view, then switching to Birds Eye view will confirm that whenever Bing took those photos the screen tower was still standing. It appears to have been a VERY large structure that had internal space behind it.

The property is currently the home of American Muscle Docks and Fabrication, a company that manufacturers floating docks.

It certainly appears from Google Maps that the screen is still standing and intact. There is a structure that makes up part of the screen which may have been for storage or living quarters, something fairly common to house the drive-in owner or manager and their families.

some of the ramps can also be seen!

WELLSBURG, W. VA. – Two men were killed and three others were injured seriously here when a concrete block screen tower on which they were working working collapsed before a strong wind. Four of the workers were on a scaffold 42 feet high when the strong gust of wind blew over the top six feet of six-inch-thick blocks which formed the screen backing.

Witnesses said the screen top bulged and the freshly laid concrete blocks tumbled down. Five workmen were buried beneath the rubble at the base of the tower. The fifth workman was unloading a truck at the foot of the wall.