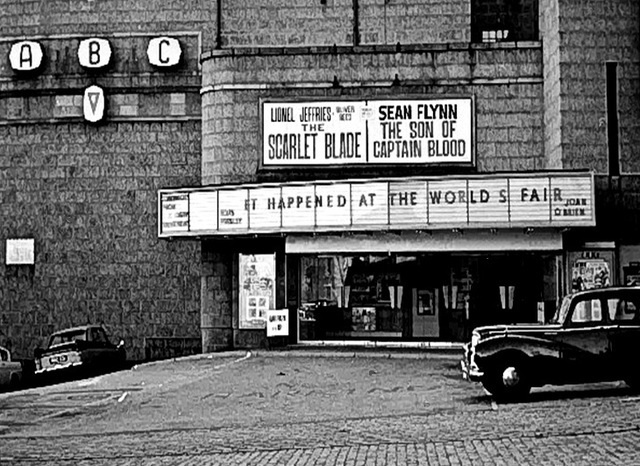 Built on the site of the Gaiety/Palladium Cinema, this was originally planned by the Associated British Cinemas(ABC) chain ‘in-house’ architect William R. Glen in 1939. Due to the outbreak of World War II, it was put on hold.

After the war, architect C. ‘Jack’ Foster amended the plans and it was built, and opened as the Regal Cinema on 26th July 1954 with Robert Taylor in “Knights of the Round Table”. Film stars Richard Todd & Ann Crawford appeared in person, and organist Hubert Selby played the Hammond (LaFleur) electronic organ which ABC were touring around some of their cinemas at that time.

Seating in the 1,914-seat single auditorium was provided in stalls and circle levels. The proscenium was 47 feet wide. There were two entrances one on 35 Union Street through which the cinema was reached along a long passageway, and another at the rear on 10 Ship Row. The Regal Cinema was re-named ABC on 24th March 1962.

The Lighthouse muiltiplex cinema was built on the site, which opened in April 2001, and since 2004 has operated as the 7-screen Vue Cinema.

This page has several interior shots as well as demolition photos: View link

I was Senior Projectionist at the ABC Cinema from 1975 til 1977.
Regards
Tony Laing