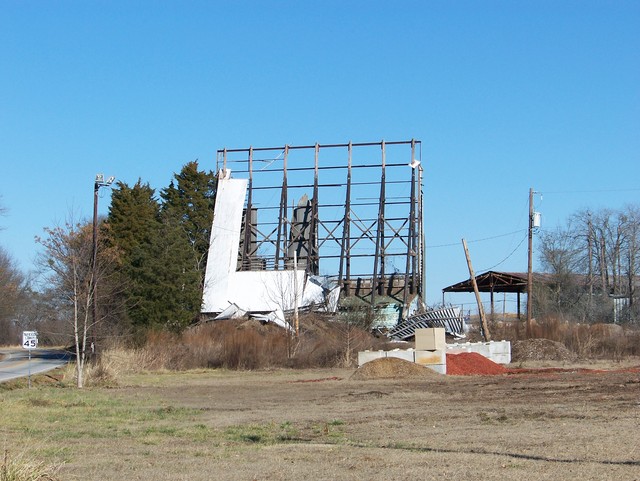 On April 24, 1971, Robert H. Williams, who was the theatre manager, was indicted for exhibiting an obscene movie. The movie was “101 Acts of Love”. Williams was found guilty and filed an appeal. The Circle South 29 Drive-In was closed down in April and reopened on June 25, 1971, showing only R and M rated movies after that. Piedmont decided that X-rated movies would not be screened at their drive-in theatres anymore. Looking at the movies the drive-in was screening after reopening in 1970 and between temporarily shutting down, it was mostly X-rated movie fare. It finally closed in November 1984, and the property was sold to Carolina Canadian Lumber Co. It is now used to store building supplies.

The sign still stands out on US 29 where the entrance was. The sign reads ‘South 29 Drive In’. Was that the original name? Then it changed to ‘Senic’ and finally ‘Circle South 29 Drive In’? Was the sign a new one put up by Piedmont, without ‘Circle’ so as not to confuse it with the new one over on the Riedville Road at the Circle? I can’t believe that the sign would have been there when it was operating as Senic. If so I wonder what the original 1947 sign looked like.

hatterasjack…Can you get us a picture of the sign?

Well here are the sign photos including one showing the dual paved entrance drives off 29. Clearly by the time this sign went up the name ‘Circle’ was no longer used.

Worked at this location in the late seventies for Mr John Vassey as relief projectionist. We ran Hardcore at that time.

It was just called South 29. Not circle south 29. The Circle Drive-in was a different place off of Reidville Road Circle.

It was advertised as Circle South in 1970.