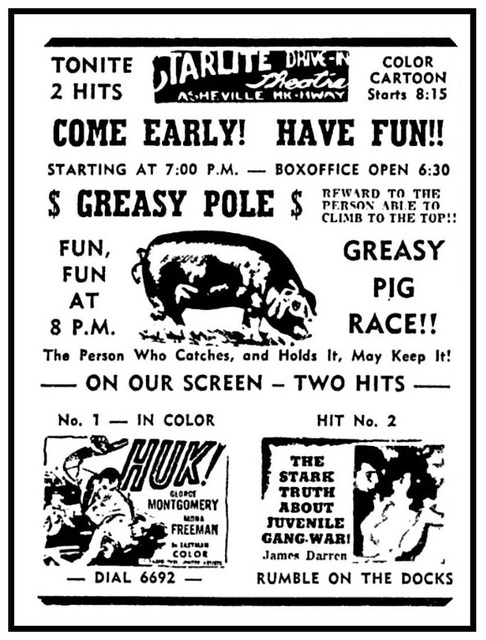 The Starlite Drive-In opened on July 8, 1948, screening “The Bride Wore Boots” with Barbara Stanwyck and Robert Cummings. It was opened by the Starlite Drive-In Theatre Inc. and owned by F.H. Pless and J.M. Pless. Its parking ramps could hold 300 cars. In March of 1951, it reopened with new management and was operated by T.A. Little. The drive-in closed for the winter on October 27, 1968. Northwest Theatre Corp. from Charlotte, SC (Part of Consolidated Theaters, I think) bought the Starlite Drive-In and completely renovated it. They added more land bringing the total to 14 and a half acres, which added 300 more parking places, at a cost of $353,000. This brought the total car capacity to 600 cars. They completely reconfigured the layout of the drive-in and added a new 130 ft. x 85 ft. screen tower, which could withstand winds of 150mph.

Two Zenon X 6,000 type projectors were installed at a cost of $40,000. They had automatic on/off in-a-car speakers. The concession stand was air conditioned and could accommodate 1,000 people in 15 minutes. It reopened as the Thunderbird Drive-In on July 28, 1969, screening “True Grit” with John Wayne, Glen Campbell and Kim Darby. Theatre manager Don Amos said “the policy will be middle-of-the-road, mainly, with a few ‘spicy’ films, because there are not enough G and M Rated movies to show all year long”.

In 1980, the drive-in was sponsoring a flea market during the day on Friday, Saturday and Sunday. The Thunderbird Drive-In screened its last movie in July 1985 and closed. The screen tower was removed and it was called the Thunderbird Flea Market. In 1989, the flea market got sold and was renamed the Spartanburg Flea Market. It is still open to this day.

JulY 4 1979 and the THUNDERBIRD is playing “JOYRIDE TO NOWHERE” and “STINGRAY” both rated PG.

Nov.2 1979 is a DUSK TO DAWN HORROR SHOW. “INCREDIBLE MELTING MAN” [this one pops up everywhere, i need to see it} “NIGHT OF THE BLOODYHORROR”,“COMA” [which really isn’t a horror movie},“RUBY” and “ISLAND OF DOCTOR MOREAU”[burt Lancaster must have needed the money].

March 3 1985 ad in the paper has THUNDERBIRD DRIVE-in FLEA MARKET. Guess the movie showing days were over.

The address for the Spartansburg Flea Market AKA the Thunderbird Drive-in is 8010 Asheville Highway.