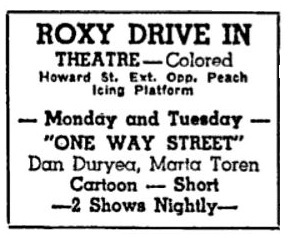 The Roxy Drive-In was opened in April, 1952. It was advertised as a colored drive-in theatre that would park 200 cars. It was operated by R.C. Saunders. It was only open for less than one year and closed on November 1, 1952. It was renamed Fox Drive-In and reopened on April 8, 1953. The reopening featured the 1952 film “Ruby Gentry” with Jennifer Jones, Charlton Heston and Karl Malden. The second feature was “Rawhide” with Susan Hayward and Tyrone Power. The theatre was operated by L.L. Theimer and eventually Claude C. Rumley would become the owner. The parking ramp size was increased so it could now hold 388 cars. Another upgrade to the Fox Drive-In in 1953 was the installation of a new 100 ft. wide CinemaScope screen tower and electrical generator.

In 1959-1960 Claude C. Romley, who was now the owner was arrested several times for showing movies on a Sunday violating the 1950’s South Carolina Blue Law 64-1 and section 5103. It prohibits operation of a movie on a Sunday without a permit from the county governing body. Rumley started to screen movies one minute after midnight on a Monday to get around the law. In August. 1961, he was charged with showing a lewd film. The movies were “Escape to a Garden Paradise” and Career Girls on a Naked Holiday" which were advertised for ‘Adults Only’. Both movies were about the nudist lifestyle. The movies were confiscated by the Spartanburg County Sheriff. Rumley said next time he would do a better job of selecting movies. The Fox Drive-In installed new projection equipment on April 18, 1968.

Don Watson, who worked for Consolidated Theatres, opened the Pinewood Indoor Theatre for Consolidated Theatres in 1965. In May 1974, Watson formed a partnership with Furman Babb and started Scott Theatres (named after his son). They opened the Royal Twin Theatre in May 1972 and bought the Fox Drive-In the same month. In March of 1979, they would buy the Greer Drive-In. The Fox Drive-In was renamed Royal Radio Drive-In for the rest of the 1975 movie season. For the opening of the 1976 season in May, the drive-in was renamed Tomcat Drive-In.

On April 10, 1977, it reopened as the Camelot Drive-In, screening “Crash” and “Billy Jack”. It also was holding a weekend Flea Market on Saturdays and Sundays during the day. The Camelot Drive-In finally closed in September 1984. In July 1985, an outdoor rock concert was held at the old Camelot Drive-In called “July Jam”, featuring Garfeet Ruff, Killer Whales, Black Oak Arkansas, Pat Travers and Molly Hatchet. A large stage was constructed at the base of the screen tower and all the parking poles were pulled up. The number of concertgoers was expected to be 7,000-10,000. Later on, the remaining drive-in facilities were demolished and an UPS Customer center was built on the property.

thanks Chuck,I was surprized no one had this one CT yet.I remember going to the Drive-in with my Mom and when the Trailer for the movies mentioned in the above handout; she made me turn my head to the back of the car.

The address should be 4000 Howard Street.