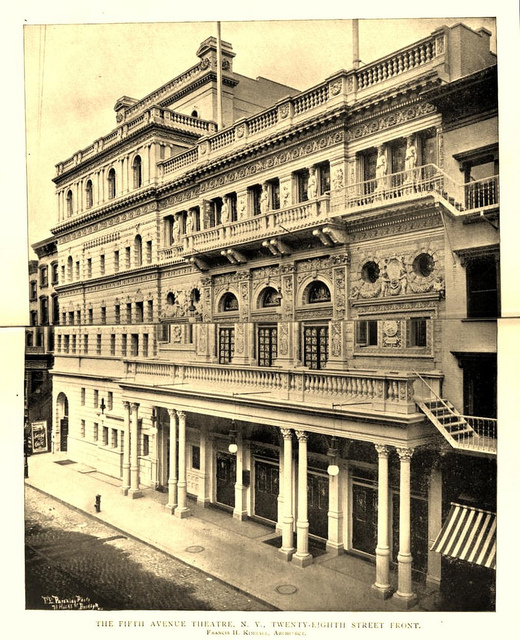 The original Fifth Avenue Theatre was on W. 24th Street next door to the Fifth Avenue Hotel, having opened in 1865 as the Fifth Avenue Opera House. When it burned down in a fire in 1873, it was rebuilt in the old Apollo Hall, not far away, on W. 28th Street. Unfortunately, this theatre also burned down, in 1891, and it was promptly rebuilt once more, on the same site.

Architect Francis Hatch Kimball rebuilt the Fifth Avenue Theatre in highly ornate Neo-Classical style, with heavy terra-cotta decoration almost completely covering the W. 28th Street entrance, which, incidentally, became the side entrance, while the main entrance was moved to 1187 Broadway, but was not nearly as richly decorated.

The W. 28th Street lobby was also a sumptuous sight to behold, with various shades of marble on the walls, gilded columns, plasterwork and intricate stained glass windows. The halls were lined with mirrors, adding a feel of depth to the narrow space, and lined with marble Ionic columns and pilasters. Persian carpets, imported draperies and artwork added to the luxurious atmosphere.

Inside the auditorium, which was about the same size as the previous space, the decor was a mix of Neo-Classical and Neo-Baroque Renaissance, again with heavy use of gilt plasterwork, and painted in shades of ivory with gold trim. Unlike its predecessor, and many of its contemporaries, the Fifth Avenue Theatre now had rows of seats, both on the orchestra floor and the set of balconies, rather than benches, which by the end of the 19th Century were considered old-fashioned.

Despite the latest innovations, like fireproof building materials, electric lighting and improved sight lines with the balcony support columns kept to a minimum, there was one drawback to the spectacular 1,530-seat house: it was now a distance from the new heart of the theatre district, at Longacre (later Times) Square. Despite some late-1890’s successes, by 1900, it had staged its last legitimate act.

In 1906 the theatre was redecorated and was taken over by Keith & Proctor’s vaudeville chain, reopening with Lillie Langtry topping the vaudeville bill. The theatre was leased to F.F. Proctor from 1911 when the Keith/Proctor partnership was dissolved, and it was renamed Proctor’s 5th Avenue Theatre. By 1915, it was showing motion pictures in addition to vaudeville acts. The seating capacity in 1926 was given as 2,400 and a Wurlitzer 2 manual, 10 rank theatre organ was installed to accompany the silent movies in September 1926. After 1929 Proctor departed from the building and movies were replaced at the Fifth Avenue Theatre by burlesque shows. In 1939, the aged theater was demolished to make way for an office building. A parking garage now stands on the site.

There is some info about this theatre in the Mary Henderson book “The City and the Theatre”. A facade illustration is included which is probably the 28th St. entrance and not the later entrance on Broadway. Augustine Daly and Henry Miner ran it before F.F. Proctor took it over. It’s listed, as the Fifth Avenue Theatre, in the 1897-98 edition of the Julius Cahn Official Theatrical Guide. The manager was H. C. Miner; ticket prices ranged from 50 cents to $2. The seating was listed as: Orchestra- 558, Balcony- 355, Gallery-356; total: 1,269. The proscenium opening was 40 feet square, and the stage was 37 feet deep. The theatre was on the ground floor and there were 15 musicians in the house orchestra.

The legendary Italian stage actress Eleonora Duse made her American debut in this theatre on January 23, 1893 with La Dame aux camÃ©lias a.k.a. Camille.

Here is a link to the type of Wurlitzer organ used at the Fifth Avenue Theatre:

Note how the site errouneously lists the Fifth Avenue Theatre as having been on….Fifth Avenue!

It was simply NOT on FIFTH AVENUE.

How very New York and THAT was the point….!

My Grandfather performed here. In May of 1916 he won a Popularity Contest, for vaudeville performers there, I presume. Over 5,000 votes, of which I hope he was proud.John (Jack) Nellis,this was a hard-won find. I wish I could have known you.