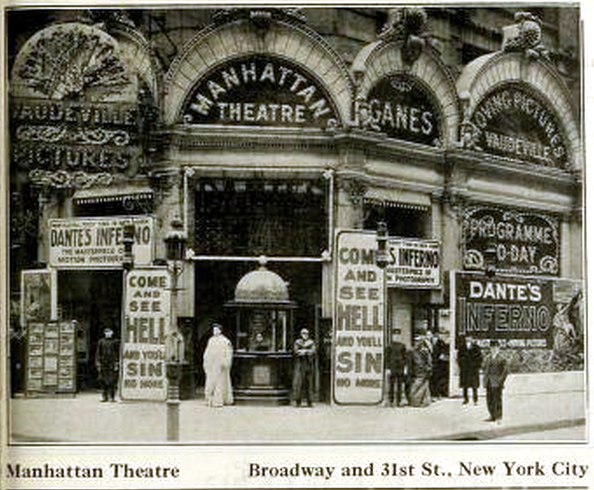 This was the second Gane’s Theatre and replaced an earlier Ganes Manhattan Theatre (former Standard Theatre) located on 6th Avenue and W. 33rd Street. This Manhattan Theatre was built and opened in 1909 and continued until at least 1912. In 1913 alterations were carried out to the plans of Philadelphia based architectural firm Stuckert & Sloan.

Could “Caine’s” or “Caines’s” have been a typographical error? It appears the sign within the decorative arch to the right of the main entrance reads “Gane’s.“ Also appears that the exhibitor signed his last name with a "G,” in that trade journal advertisement, though the signature could read “Gane” or “Gaine,” depending on how carefully you scrutinize it. But, however he signed it, I suspect he’d have spelled his name correctly when paying for it to go up in lights on his theatre’s edifice.

I also think it may be a typo; I found two quotes about this theater in online archived publications.

1) Motion Picture World, 1908: “Manager Ganes, of the Manhattan Theater, extended an invitation to the jackies at the Navy Yard to visit his theater and see Pathe’s fine picture of the reception of the American fleet in Australia. They came, they saw and they thoroughly enjoyed the spectacle and made many audible comments on the show. The incident in the film which received the most applause was the march past of the regiment of Highlanders. The military precision and fitness of this kilted regiment was a fine subject for the camera and well rendered.”

2) New York Dramatic Mirror, 01-31-1912: “First-run pictures, as they are called on the day of release, can be seen at the following houses: Three new reels daily at Ganes Manhattan Theatre, Broadway and Thirty-first Street..”

This paragraph about the Manhattan Theatre’s owner, William Gane, is from Robert Grau’s book The Business Man in the Amusement World, published in 1910:

“As a manager Mr. Gane began his career at the Manhattan Theatre, since razed by the Pennsylvania Railroad, where he presented moving pictures. His success there was marked by crowded houses, and when he was forced to vacate he built the present Manhattan Theatre at Broadway and 31st Street.”

Pepperama is correct. The first Gane’s Manhattan Theatre, operating from 1907 to 1909, was the former Standard Theatre, located on 6th Avenue between 32nd and 33rd Streets. It was demolished in 1909 to make way for Gimbel’s Department Store, which is now occupied in part by a branch of J.C. Penney’s.

The second Gane’s, of which we have four photos on our photo page, must have been on the southwest corner of Broadway and 31st, and was in operation by 1910. Note in the vintage photo uploaded by CharmaineZoe the angle at which the pedestrians on Broadway are crossing the side street. The theater was clearly on an obtuse corner.

The three most distant of the four buildings to the right of the theater in the photo are still standing on West 31st Street, though the nearest has had its top floor lopped off. The fourth of the group, the one adjacent to the theater building itself, is gone.

Apparently there were 2 separate Gane’s theaters, the first one being located at 33rd and 6th Ave, across from Greeley Sq. in what had previously been the “Standard Theater”. According to IBDB, the “Standard” was a legit theater that operated up until 1907 when it switched over to showing films. It remained standing until 1909 when it was razed as mentioned in Joe’s article. The main photo shown on this page for this theater is actually that of this 6th Ave / 33rd St. structure. One can make out the 1902 Sak’s department store building which sat at the opposite corner of 33rd in the background along with the 6th Ave elevated rail.

Once the 1st Gane’s theater was razed in 1909, the 2nd Gane’s theater was apparently built at the new location on the corner of Broadway and 31st. Even though the street address given here is an even number indicating it was on the east side of Broadway, there is some photo evidence to suggest it was actually on the SW cor of 31st & Broadway, on the same block as the Bijou Theater of about the same time.

The photograph of the 1st Ganes Theatre (former Standard Theatre) has been moved to its correct page.