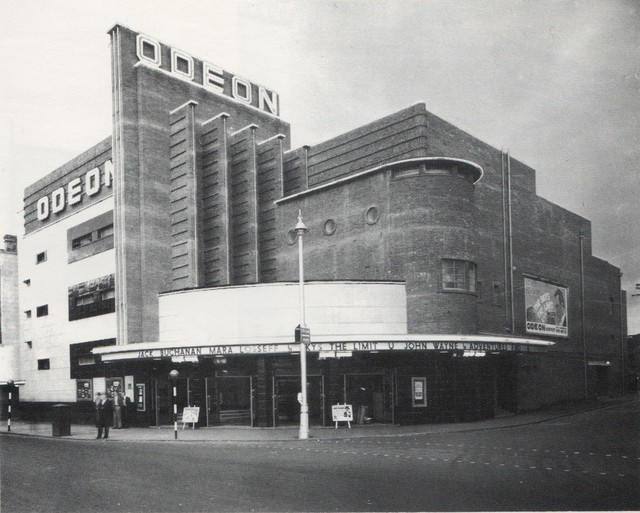 The Newport Odeon Theatre was opened on the 12th of March 1938 with Nova Pilbeam in “Young and Innocent”. It was designed by architect Harry Weedon and the job architect was Arthur J. Price, built in classic Art Deco style for the Oscar Deutsch chain of Odeon Theatres Ltd.

It remained the Odeon until its sad closure on 30th May 1981 with Elliott Gould in “The Last Flight of Noah’s Ark”. It was empty for 21 years, apart from a period when the ground floor was used as a snooker hall from 1986 to 1991. For a short while it became Capone’s American Bar nightclub. However the building miraculously escaped demolition.

In 2003, the former cinema was restored as a music venue keeping many of the surviving original features. Re-named Newport City Live Arena, it is one of only two buildings in Newport that have an Art Deco style, the other being the Maindee Baths.

In early-2008, it was reported that the building was in use as the Newport City Church, but they had moved out by February 2009, and the building again stood unused. In early-2010, it had been taken over by Chris Plaister (a member of the Cinema Theatre Association) and was being developed into a museum of cinema and television equipment history.

In January 2015 it was purchased by Andy Byers from Bolton, and work began to restore the building. It will re-opened as a 2,000 capacity music venue on 27th February 2016 with X-Factor finalists Rough Copy performing. It will be re-named Neon ‘Newport Entertains Our Nation’, a play on the original Odeon name which Oscar Deutsch advertised as ‘Oscar Deutsch Entertains Our Nation’. In May 2016 the two top floors of the building will be converted into cinema use, and show classic and Bollywood films.

The former Odeon Theatre is a Grade II Listed building.

i would very much like to know further information on this buildings lease, who holds it the prices. i would also hate to see this building get demolished or turned into more flats. i am fed of the council building flat after flat. i would like to use this building for an enjoying place for the community. somthing more for the people.

the “Newport City Church” has now vacated the building. Probably due to high running costs and an ever increasing list of repairs that needed doing.
martin

the exterior of the old Odeon in Newport is still looks in remarkably good condition. all of the original tiles are still in place. It also still has its original canopy .the roof was leaking last time i was in there primarily in the derelict projection room and I think this would be quite expensive to rectify.
I love this old cinema. As I have said before its a miracle its still standing as it hasnt been used as a cinema since 1981, which will be 30 years next year.
This cinema operated as a one screen cinema until its decline in the late 70s, as the auditorium was never sub divided.
martin

I can only agree with you in what Chris has done with the former Odeon in Newport to establish a permanent home for his cinema memerabilla and projection equipment. The building itself is a classic art-decor Odeon design of the mid 1930s the exterior totally unchanged and now thankfully listed as a classic example of Odeon cinema design, He does indeed need the support and encouragement of every user of cinematreasures to maintain this building and improve it as a living museum of film and projection equipment.

I do find it quite strange that Chris Plaister hasnt posted anything on here himself regarding his project in the former Odeon you would think it an ideal place to advertise for voluonteers. this site is 100% patronised by cinema enthusiasts. If he hasnt told anyone how can he expect anyone to help.

the web address above is wrong my website is www.walesvintage cinema.com its a work in progress and I am hoping to add to it on a regular basis.

This Cinema was not built for Odeon Theatre Ltd., which was purely a Management company .. It was the Odeon Theatre (Newport)Ltd., and had 50 Shareholders With Oscar and Lilly having 100 shares each.. As was all built Odeons ..

According to the website the cinema has not yet reopened.