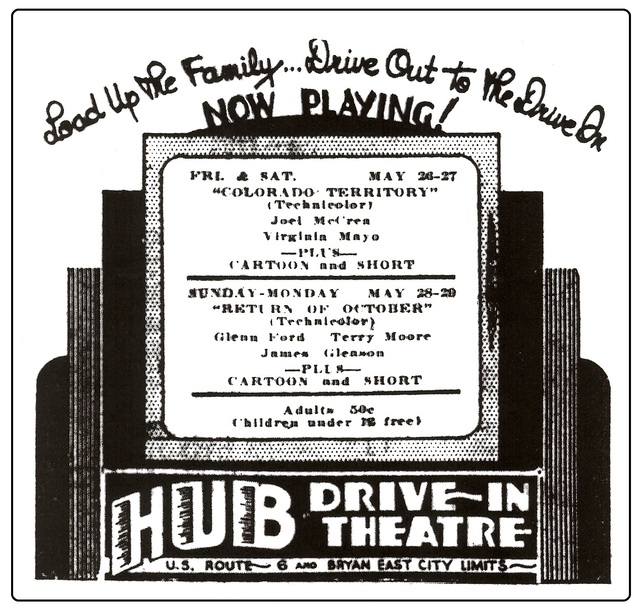 The Hub Drive-In opened May 26, 1950, with work on the theatre beginning in November 1949. It screened “Colorado Territory” featuring Joel McCrea and Virginia Mayo, with a fireworks display to celebrate the opening night. The Hub Drive-In had a 418-car capacity and was owned by the DACO Corporation. Jack Hagerman was the theatre manager. He was the former manager of the Temple Theatre in Toledo, Ohio, plus he was a salesman of theatre equipment. Screen size measured 50 feet x 36 feet with in-car speakers. Two Century projectors with a picture throw of 250 feet and sound equipment by Altec-Lansing. Co-Operative Theatres of Ohio were the booking and buying agency.

In the spring of 1956, a new CinemaScope screen and projection equipment was installed. On March 28, 1959, the drive-in was leased to the newly formed Hub Drive-In Theatre Inc. for twenty years. Samuel P. Correl was the president and Albert B. Lafton was the secretary. They also leased and operated other movie theatres in the area. In the late-1970’s, General Theatres of Lyndhurst, OH operated it. Into the 1980’s, after complaints from the Williams County Sheriff and others about underage drinking parties and showing R-Rated movies, it closed in 1985.

In late-1986 the property was sold to Henry Ford from Bryan to be redeveloped. Ford remembers working at the drive-in in 1950 when it first opened. It is now the location of the Don C. North Municipal Building and an empty shopping plaza.

According to this list, the theater was on Rt.34, east of Bryan in Williams County: http://www.forgottenoh.com/driveinlist.html

One pretty decent Double Feature in the early seventies,“BONNIE AND CLYDE” and “BULLITT”.One stupid Double feature.“EASY RIDER” and the R-rated soap opera,“THE LOVE MACHINE”.Can’t make this up.