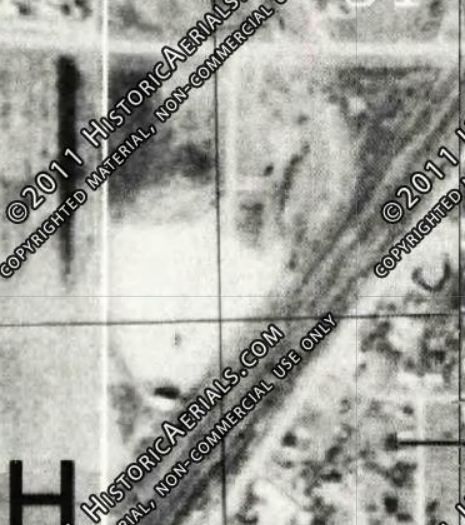 The Cow Town Drive-In opened June 1, 1952, featuring “The Nevadan” from 1950 with Randolph Scott, Dorothy Malone and George F. Slavin. The second feature was “The Big Wheel” from 1949 with Mickey Rooney, Thomas Mitchell and Mary Hatcher. The drive-in was a partnership of Beverley Miller, Mary Belle Miller and Joseph W. Stark from Wichita, KS. In March of 1968, Mid-America Theatres Inc. located in St. Louis, MO. purchased the Cow Town Drive-In. At that time Mid-America owned and operated 20 theatres in MO & IL. On October 15, 1972, the Cow Town Drive-In closed for the season. In the early morning of October 20, 1972, a fire of unknown origin started in the concession stand and it did considerable damage.

On June 7, 1977, the ‘R’ rated movie “Smartie Pants” along with a second feature of “The Young Seducers” was screened at the Parkview Drive-In. On July 15, 1977, Clifford Brigman who was the chief projectionist for the drive-in at that time was charged with showing obscene movies. He pleaded not guilty to the charge. The action stemmed from a complaint by Harlan Springs, that the drive-in was showing obscene movies that could be seen by neighborhood children. Harlan Springs had picketed the drive-in with his two sons in June. Mr Brigman was found guilty by a jury and fined $250 plus $50 in court costs. He immediately filed an appeal and in August 1977 the obscenity case was dismissed. The court dismissed the case because the city did not have sufficient evidence to support the obscenity allegation. The city did not have a copy of the movie as evidence. All costs were refunded back to Brigman.

The Parkview Drive-In closed for good on August 7, 1979. It is now a salvage yard.

I now have more proof that the correct address was in deed 1526 Parkview I have uploaded 10 pictures of City Directory located at Downtown Library in St Joseph Mo. Starting with 1972 City Directory when it was first know as the Cowtown. 1979 City Directory when it was last opened and known as Parkview Drive-In also 1981,82,83,84 when it was called Cycle X Motor Cycle Track. Just don’t ever remember this one. From 1985,86,87,88,89 it was shown as being vacant. I’m sorry to say my camera was needed a recharge and was unable to take the 1990 City Directory but I did look at it. That was the year it was listed as Barnard’s Auto Salvage with a address of 1206 Alabama. I don’t know why it changed to 1206 Alabama in 1990. But during the time period it was a Drive-In 1526 Parkview was the correct address. It did not become 1206 Alabama until 11 years after it closed as a Drive-In

Update on finding the add for the very last movie shown at the Parkview Drive-IN. I have finished checking the St Joseph Mo Newspress papers for 1980,81,82 which at the time was the evening newspaper did not find anything. I now believe it was posted in the St Joseph Mo Gazette which was at the time the morning newspaper at the time which only ran Monday-Friday. When I talked with Clifford Brighmans Widow she does not remember this so I’M thinking the person MUST of been the Assistant Manager of the Drive-In of who she don’t remember the person’s name. I do remember there was 2 different adds one that was about a week before and then the day of the event and the last movie was The Attack of the Killer Tomatoes and the Wet Teeshirt contest. So Im still looking.

Tp…..you are correct about the address. It was 1526 Parkwood. But to use the goggle maps feature of CT to map to the correct location we need to use the current address of the property.

I was with the understanding that we were to list the address of the drive-in/theatre and not what google maps. (Google maps are horrendously wrong a great number of times.) I am new at this so correct me if I am wrong.

I have solved the address debate the actual address was 1206 Alabama. The street Parkview was a street that ran along side of Alabama with about only 8-10 ft separation between the 2 streets. The Mailbox for mail delivery was located on Parkview Street this address of 1526 Parkview was only used for Mail delivery and Newspaper Adds.

The Feb. 6, 1954 issue of Boxoffice ran a full-page profile about the rustic look of the Cow Town. It included several photos, most of which have already been uploaded here. 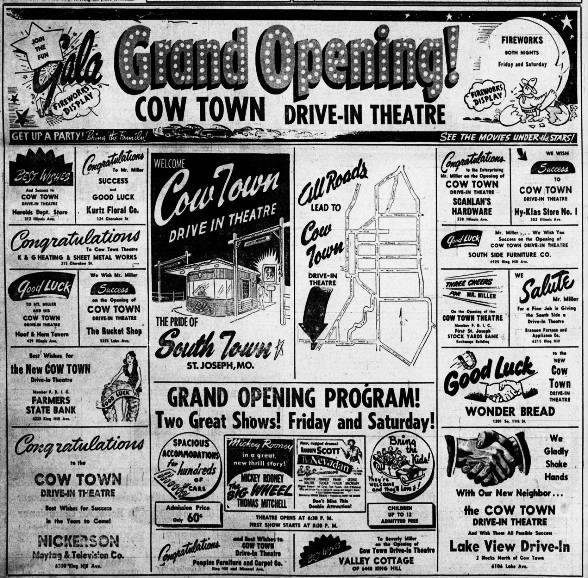