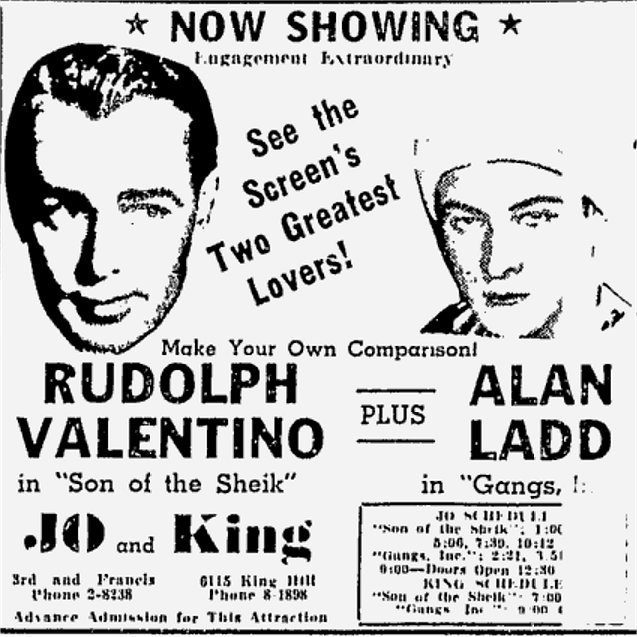 The theatre seated 441 and was operated by Dickinson Theatres out of Mission, KA along with two other theatres in St. Joseph. The King Theatre closed on May 4, 1955 with Maria Montez in “White Savage” & Paul Henreid in “Last of the Buccaneers”. The vacant building was demolished in the late-1960’s.

The wall on the north side of the building looks like it was once a common wall between two buildings. Part of the top at the back has been taken down, and in Google’s street view photo it looks like some exposed bricks have broken off of it. I think the building the King Theatre was in might have been a bit taller than the building the dance studio is in.

Joe I went to a Facebook site called St Joseph Mo Past, Present and Future asking anyone who remembers anything about the King Theater. So keep checking with site for added responses.

these people remember going to movies at this place

I grew up in St. Joseph and I remember the King Theater quite well. I remember spending many a Saturday afternoon, in the summer, in the coolness of the theater watching double features. The King Theater closed in the mid 50s and was never occupied by any business until it was demolished in the late 60S. The building in the picture is not the King Theater. The building pictured, currently Darcee’s School of Dance was originally Weiner' Department Store. To the south of Darcee’s is the intersection of East Hyde Park and King Hill which was the “main drag” providing access off Mason Road/East Hyde Park Streets to King Hill Avenue until road were made in the late 60s. The grassy area immediately to the left/north of Darcee’s is where the King Theater was located and north of the King was the Brown family home. The King Theater and Weiners’s Department Store/ Darcee’s did not share a common wall. There was a narrow space between the two building that collected a lot of trash and debris. In behind Darcee’s and the King Theater was a large, undeveloped hill which we used to play on. During hard rains mud would was from the hill into the street south of Darcee’s creating a slippery mess and a safety hazard. In the late 60s the highway department removed Weiners Hill, the King Theater and the brown family home to provide a direct access from Mason Road/East Hyde Park Streets to Alabama Street.

First newspaper adds appeared in both the St joe newspress and st joe gazette on August 27, 1942 which would make that the opening day for the king Theater

The south side Valley Theatre operated on King Hill Avenue from the silent era and didn’t covert to sound closing in 1930. The Dubinsky Brothers relaunched a new Valley Theatre across the street at the this former factory location on May 19, 1934. The theater immediately made headlines for running low-cost shows with non-union projectionists. The theatre was then the subject of a monopoly suit in 1940 by the competing Rialto Theatre owners who alleged that the Valley Theatre was merely a loss leader aimed at driving their independent theater out of business.

The theatre was closed. A new independent operator took on the theatre calling it the Nickel-O-Dion Grand Theatre on July 1, 1940. A year later, prices increased to 10 cents and the truncated new name, the Grand Theatre. It closed at the end of July 1941 and reopened under new management on November 15, 1941 closing after just a month of operation. The following August, the theatre relaunched as the King Theatre on August 22, 1942 with the fine double-feature of “Jesse James” and “The Return of Jesse James.”

The King Theatre was closed on May 4, 1953 with a double feature of “White Savage” and “Last of the Buccaneers.” The Dickinson Theatre would only offer the theater building with a “non-compete” clause ending the theater’s operation.

BTW: It was never called the Great Plains Grand Theatre.

Dallasmovietheaters im sorry to tell ya this was never the Valley Theater the address for the King Theater was 6115 King Hill this was 1st opened up as Great Plaines Grand only opened for 3 weeks before closing and the opening up as King. The Valley Theater was 6121 King Hill if you go to Valley Theater please read my comments. The King was listed as vacant for many years the 1968 City Directory was the last year it was listed in the City Directory. I believe the building was thorn down sometime in 1969.

Gala Opening of the Great Plains Grand Theater 6115 King Hill Ave opened on Sunday 7 April 1940 newspaper adds in St Joseph Gazzett the last day of the adds was Tuesday 23 April 1940 believed to be open for only 17 days.