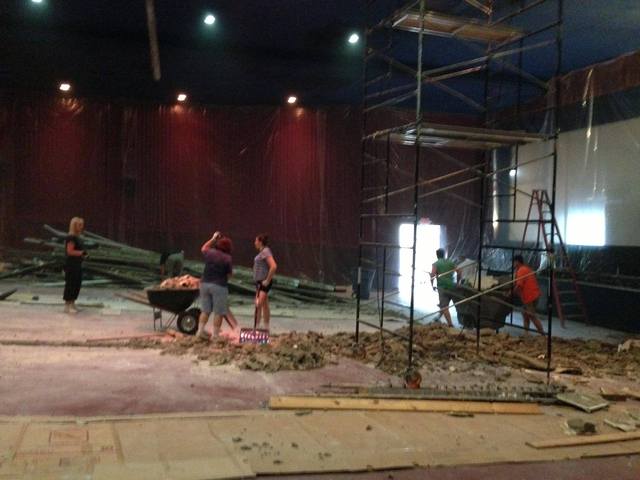 Opened as the Clifford Theatre in 1905, it was designed by architect George Otis Garnsey and was destroyed by fire in 1941. It was rebuilt, opening as the Gloria Theatre on December 25, 1941. I grew up in the Gloria Theatre in Urbana, Ohio. My father, Jack Frazee, was the manager of this beautiful movie house for many years.

The theatre was built by Warren Grimes, the owner of Urbana-based Grimes Manufacturing Company. It was named for Mr. Grimes' daughter, Gloria. It has always been operated, to my knowledge by Chakeres Theaters Inc.

The building reflected the architecture of the 1940’s, with rounded corners, indirect lighting, and sweeping, Art-Deco style lines. It had an outer lobby and a huge inner lobby, in which new automobiles were often displayed. The auditorium was quite large for a small-town theater. It probably contained about 600 seats. There was no balcony.

A unique feature of the Gloria Theatre was “Grimes Booth.” This was a private viewing room on the second floor of the theatre that was reserved for the Grimes family.

The Gloria Theatre was twined on December 25, 1968 and renamed the Urbana Cinemas. It was still in operation as a Chakeres Theatre. It was ‘temporarily closed’ for renovations in April 2010. It was reopened in October 2015 with “Ghostbusters”. Further renovations were carried out in Fall of 2021.

a view of the Gloria as it appeared at its opening on Christmas day 1941.

Judging from the apparent age of the side walls, at least parts of the Clifford must have survived the fire to be incorporated in the new structure, though the Clifford was a larger theater than the Gloria. The Cahn guide of 1910 said that the house seated 1,200, and its stage was 35 feet from footlights to back wall and 80 feet between its side walls. The proscenium was 40 feet wide and 30 feet high. The modern theater doesn’t appear to have a stage house at all.

This web page has a photo of the historical marker commemorating the Clifford Theatre. I’ve been unable to find any period photos of the outside of the Clifford Theatre, which opened in 1905, but a 1911 picture of the auditorium appears on page 2 of the May, 2008, issue of the Champaign County Historical Society’s newsletter, available in PDF format at this link.

The article RidgewoodKen linked to says that the theater was built “…in the early 1900s….” and notes that local resident John Carmazzi remembers going to the theater in 1939, the year before Warren Grimes bought the house and renamed it after his daughter.

Another article about the closing of the Urbana Cinema notes its connection to the Clifford Theatre, saying this: “In September of 1940, Urbana aviation lighting pioneer and industrialist Warren Grimes bought the building and tore out the decayed parts, remodeling the old structure into a premier motion picture house for Champaign countians.”

Mr. Carmazzi’s memory indicates that the Clifford Theatre was still operating (though he doesn’t mention the name) in the late 1930s. As I noted earlier, it’s pretty clear from the look of the building that it incorporates at least the side walls of the Clifford Theatre, built in 1905.

This is now closed.

Facebook page of the nonprofit group working to restore the theatre: https://www.facebook.com/grandworksorg

Gloria is re-opened since Oct. 2015. Opened with Ghostbusters! Grand works foundation, Urbana Methodist Church, & citizens have contributed to bringing back this now only in Champaign county gem! A large army of volunteers have been replairing & replacing the curtains, projection, stage and screen. Live venues too have been booked….

GrandWorks Foundation has brought the name Gloria Theatre back to this house. A renovation project is ongoing. The venue is to be operated as a “…multi-purpose entertainment, business and community center….” Here is their web site.

The December 23, 1968, issue of Boxoffice has a brief notice about the two-screen Urbana Cinema, slated to be opened by Chakeres Theatres on Christmas Day. The opening would also mark the 27th anniversary of the opening of the house as the Gloria Theatre, on Christmas Day 1941.

An earlier Boxoffice item, from July 11, 1966, said that Chakeres Theatres had bought the Gloria, which the chain had operated under a lease for the previous twenty-five years, from Warren Grimes.

Just uploaded some new pictures. I was passing through town.

The April 20, 1907, issue of the Chicago financial journal The Economist had this item:

“George 0. Garnsey has completed plans and will take figures for a three-story addition, 43x90, to the front of a theater in Urbana, Ohio, for the Clifford Amusement Company. The first floor will contain the main entrance, a store and restaurant, and the upper floors will contain an armory. It will cost $25,000.”

As George Otis Garnsey (1840-1923) was a fairly well-known theater architect (some forty theaters and opera houses, mostly in smaller midwestern cities), it’s possible that he also designed the Clifford Theatre as it was originally built in 1905.

The 1910 map shows the ‘Billy S. Clifford Theatre’ had quite a large balcony. Perhaps this was torn out in the remodel. There is indeed an armory on the upper two stories.

The 1909-10 Cahn guide calls it the New Clifford Theatre, and gives the capacity as 1,200. Billy was the owner, while Ed. C. Clifford is listed as the manager.