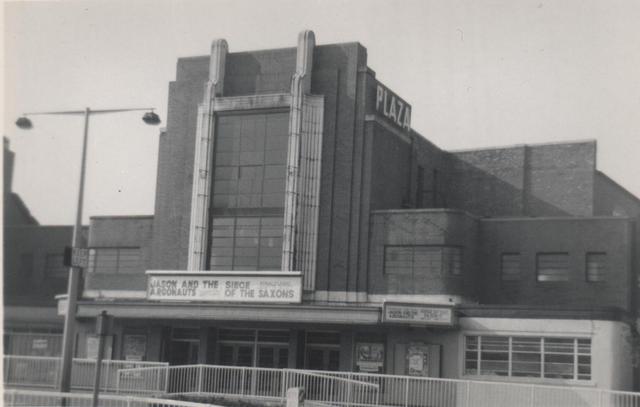 Located in Chorley, Lancashire. The Plaza Cinema was opened on 22nd March 1937 with Cecily Courtneidge in "Everybody Dance". Built for the independent John Buckley Theatres Ltd, it had seating provided in stalls and circle levels. The proscenium was 40 feet wide, and the stage was 29 feet deep. There was a cafe and dance lounge in the building.

In 1941, a Christie 3Manual/8Ranks organ was installed and it was opened by organist Reginald Liversidge. The organ had originally been a 2Manual/4Ranks (enlarged in 1930 to 2Manual/6Ranks) instrument installed in 1928, in the Pavilion Cinema, Piccadilly Circus, London.

The Plaza Cinema was taken over by the Leeds based Star Cinemas chain in 1962. Occasional use of the stage for live shows continued, and also wrestling was presented. In 1970, it was tripled, and later a fourth screen was installed in the former cafe/dance lounge. Seating was now provided for 130, 198, 131 and 94, and was re-named Studios 1-2-3-4. This was closed in August 1986. It was converted into a Body Rock gymnasium. By 1997 the remainder of the building was converted into flats and shops, known as the Astley Centre, retaining the original Art Deco style facade. The building was demolished in 2012.

map placement is way out

This was not twinned in 1970 but in fact tripled from the start. Studio 4 was then added by utilising the old restaurant space just off the circle foyer. It was the fastest conversion at the time with only 21 days elapsing from the Plaza closing to the Studios 1-2-3 opening. The building was demolished in 2012.