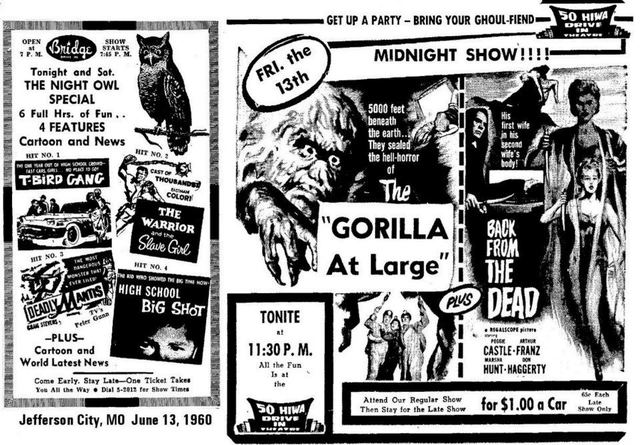 Opened as the Skylark Drive-In in 1949 with a 395 car capacity. It was renamed Bridge Drive-In in September 1955. When it opened it was part of the Durwood Theatres chain. Later operated by AMC and finally by Crown Cinemas.

The Bridge Drive-In closed in 1982 and has since been demolished.

Thanks Chuck1231.Great ads you do not see anymore.

Durwood Theatres had a movie lock in Jeff-City at the end of the 1940s with the established four-wall Capital and State. But an independent decided to build an ozoner ultimately named the Hiwa 50 Drive-In Theatre in 1949. Durwood decided to build an even larger drive-in to undercut the newly-created indy. And on September 22, 1949, the Skylark Drive-In Theatre launched for the Durwood Circuit.

Late in the 1955 season, a new bridge for Jeff-City opened giving an improved traffic flow for the drive-in. Ads said “ride the bridge to the Skylark.” But a light bulb went on, and for the 1956 season, the Skylark was renamed for the structure it was just past and was called the New Bridge Drive-In Theatre for the entire ‘56 season. In 1957, “new” was gone and it became the Drive-In Theatre which would receive significant upgrades for the 1959 season.

American Mutlicinema (AMC) took on the Durwood portfolio in 1961 including the Bridge.The Bridge would fall into controversy in 1971 while showing the X-rated “Myra Breckenridge.”

Boxoffice, Sept. 24, 1955: “Durwood Theatres is changing the name of the Skylark Drive-In at Jefferson City to the New Bridge and has ordered an impressive new marquee sign for it with the new name.”