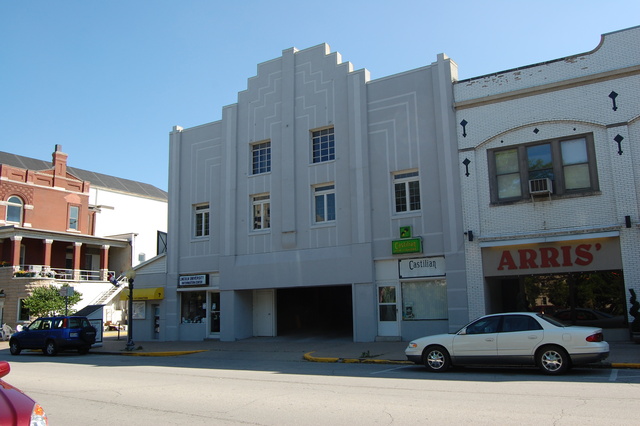 The Capitol opened on June 5, 1935 as part of the Dubinsky circuit and was located right across the street from the Missouri Capitol Building. It had a seating capacity for 1,238. It joined the Durwood chain in 1948 and closed on May 15, 1970.

It was later converted rather hastily into a one level parking garage. The sidelights and balcony were left intact and the seats were simply replaced by asphalt. Tattered bits of the red stage curtain remained hanging above the exit for the next 25 years, and storage shelves set high on the walls were made from old placards advertsing golden-age movie house events such as “Bank Night”.

The building is still intact today.

I’ve got a picture. I’d use the add photo feature if it worked.

Seth feel free to send them to

You can find out more history at:
http://www.cinematour.com/tour/us/11022.html

I recently went to the Capitol Theatre and took some new pictures of what the theatre looks like now. It is really neat. I would love to buy it and fix it up. Does anyone know where I can post pictures of this theatre, like possibly another website that has information on this theatre?

Here is part of an article from the Jefferson City News and Tribune dated 1/6/35:

Dubinsky Bros, yesterday announced the purchase of the Krafft Motor Company building, 111 West High street, and that the erection of a new theater on the site would begin February 1.

The announcement was made by Ed Dubinsky, head of the firm, who arrived yesterday. He said the deal was closed Thursday. The building was owned by the Farm and Home Building and Loan Association of Nevada and for the past several years had been occupied by both E. W. Decker and the Krafft Motor Company.

The new theater will have a seating capacity of 1270 persons. The floor will seat 900 and the balcony 370. The distance between the last seat and the stage will be approximately 118 feet. Mr. Dubinsky was accompanied by Robert Boller of Kansas City, theater architect, who has built modern theatres in St. Joseph, Kansas City and cities in California, Kansas and Missouri.

The Miller Theater will be closed as soon as the new theater is completed and will remain closed for the duration of the Dubinsky lease, which expires February 1, 1936.

I come to bury Caesar, not to praise him. From the Jefferson City Post-Tribune, 4/3/70:

Stanley H. Durwood, president of Kansas City based American Multi-Cinema, Inc., today announced the sale of the Capitol Theatre in downtown Jefferson City to the Central Realty Company, an affiliate of Central Trust Bank. At the same time Durwood explained that AMCI will continue to operate the theatre for at least one year with options for continued operation at the end of that tune.

In announcing the finalization of sale arrangements Durwood explained that the new Ramada (4) Theatres offer a completely new concept in motion picture exhibition which has met with immediate acceptance in major markets across the country where AMCI operates. The four auditions under one roof allow for a much wider diversification of film fare for the patrons selection and this, combined with the latest innovations in theatre equipment and patron comfort to a great extent makes obsolete past methods of theatre operation.

“While the Capitol has been and always will be a theatre of which we are very proud we feel the Ramada (4) Theatres represent the future of our business and, like any successful business we are building for the future as we see it,” Durwood said. Sam Cook, President of Central Trust, said that the Central Missouri Realty presently owns property adjacent to the theater and is considering development in this area, at a future date.

From 2010 a photo of the Capitol Theatre Buidling in Jefferson City.

Now thats what I call a drive-in theatre.

Nice to see that Arris Pizza has expanded. There used to be a couple of business storefronts between the Capitol and the pizza place (an insurance agent and a light store, if I remember correctly). I can still remember smelling the pizza while we were standing in line for tickets, even when Arris was closed!