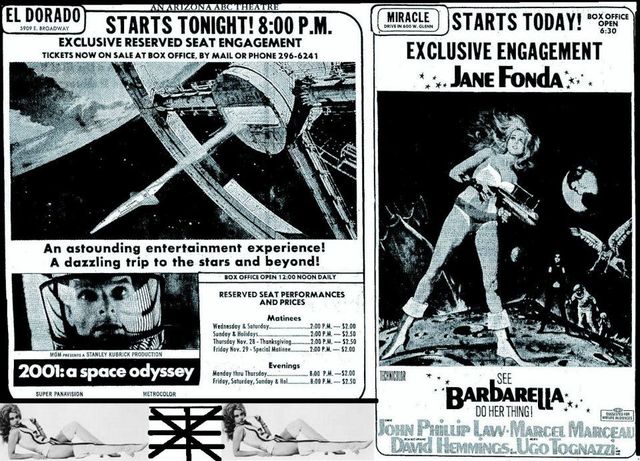 The Biltmore Motor-Vue was opened March 18, 1948 with Randolph Scott in “Albuquerque” & Batty Fitzgerald in “Easy Come, Easy Go”. It had a 525 car capacity. It was operated by Paramount Nace Theatres.

On April 12, 1963 the name was changed to the Miracle Mile Drive-In, opening with Vincent Price in “Diary of a Madman” & Louis Jourdan in “Amazons of Rome”. The ozoner was operated by ABC and finally by Plitt Theatres until it closed in 1978.

I used to go here when it was still called the Biltmore Drive-in. There was an area in front of the screen with speakers where people without cars could sit and watch the movies at a reduced price. I saw a fair number of films here including THE MASQUE OF THE RED DEATH, and THE FLESH EATERS.

Please add that it was (originally) operated by Paramount Nace Theatres.

E.B. Peagram launched the $125,000 Biltmore Motor-Vu drive-in on March 18, 1949. Architected by the drive-in specialists, the Utah firm of Cartright & Wilson, the theater was built behind the Biltmore Hotel. The Biltmore was Pegram’s 21st drive-in but first in the southwest so he opted for what he termed the first drive-in with Spanish motif. The 500-car drive-in opened with “Albuquerque” and “Easy Come, Easy Go.” Under Paramount-Nace Circuit operation, the name would be changed on April 12, 1963 to the Biltmore Miracle-Mile Drive-In Theatre. The theatre would pass from Paramount-Nace to ABC Theatres. The theatre was impacted by Mountain zone Daylight Savings Time with business dropping about 30% in 1967. Plitt would take on the ABC Theatres and ABC-Interstate Theatres steering the Miracle-Mile to its closure.

There was a nice long article in the April 28, 1956 issue of Boxoffice describing how incoming manager Ralph Bradshaw ended the practice of using an armed guard to chase away vandals and began employing young native Americans from a nearby Yaqui settlement to maintain and police the site.

As noted in the Grand Opening ad that dallasmovietheaters uploaded, the Biltmore opened on March 18, 1949. A front-page story in the Feb. 21, 1949 Tucson Daily Citizen added some details: “The Biltmore Motor-Vue, Tucson’s new $125,000 drive-in theater, will open in mid-March, according to E. B. Pegram, Bozeman, Mont., owner of the new enterprise. Located directly behind the Tucson Biltmore motel on Oracle road, the drive-in will have a capacity of 450 to 500 cars … Architects and contractors on the job are the Utah firm of Cartwright & Wilson, specialists in drive-in theater construction.”