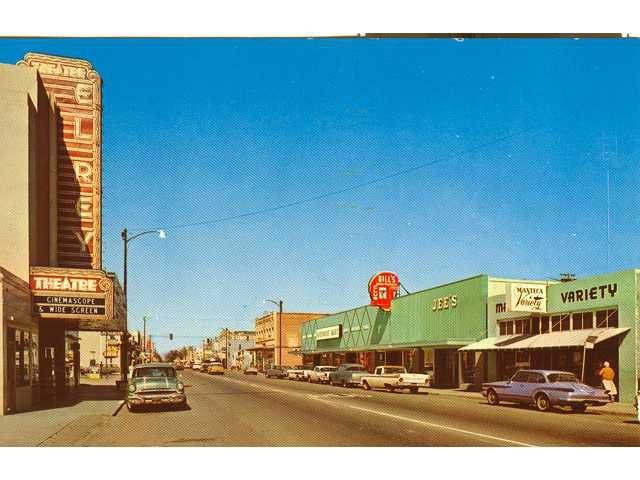 The former El Rey Theatre, once an elegant example of the Art Deco style dating from the 1930’s, including a large triangular-shaped blade marquee spelling out the theater’s name, was a long-time fixture of downtown Manteca.

During a screening of "The Towering Inferno", ironically, in 1977, a fire started in the El Rey, and quickly gutted the entire old theater. The shell of the El Rey would stand ignored for another twenty years.

It wasn’t until 1997 that brothers Shon and Joe Kelley saw the El Rey’s ruins, and decided this was where they would build their new brewery and eatery, after a $2.5 million reconstruction.

The Kelley Brothers Brewery and Brickyard Oven Restaurant is designed inside to resemble a Bavarian-style beerhall, and includes two levels, with the brewery on the main floor and the restaurant upstairs, with a view of the main floor.

The exterior of the former theater has been renovated to close to its original appearance, but without the original marquee. The interior has been remodeled and is now a banquet hall.

The El Rey was a nice theatre, as a child, we would go there, and also to the Oakley Theatre in Oakley. When lit up you could see the vertical all the way down Yosemite. On the marquee, it always said, “completely air conditioned”. One time, the curtain broke while closing and it sounded like the counterweights in the back fell through the floor. Two workers went up and pulled the curtains back, it was very hard to do as the curtains were extremely heavy. The audience was geering and screaming really loud. This little girl in the row ahead was eating a chocolate covered banana from Foster Freeze down the street put the ½ eaten banana on a seat in the next row. This big fat lady sat down on it and it made a loud squishing noise. When she got up the banana was sticking on her butt. The interior was pretty with blue stars and it looked like mermaids on the walls. When it caught on fire, the theatre closed and the marquee was still there for a few years, but dismantled later. Funny, during the intermission they played “A Beautiful Morning” by the Rascals.

The actual date of the fire which gutted the El Rey was August 5th, 1975. The event was reported in the Los Angeles Times the next day.

The El Rey was built by William Peters. San Francisco architects Mark T. Jorgensen and Otto A. Deichmann prepared the plans, according to the Better Theatres section of The Motion Picture Herald, October 17th, 1936. The theatre probably opened in 1937.

There is (or was) an El Rey Theater in Paradise, wherever that is. It should be added if it’s not here under another name. Here is a picture from the UC Davis Collection:

> There is (or was) an El Rey Theater in Paradise, wherever that is.

Paradise is up by Chico, nowhere near Manteca.

An article about the El Rey fire from the Modesto Bee appears here.

There is another photo of the brewery here:
http://tinyurl.com/6fslak

They called the El Rey “The Grand Dame” and it was. We used to have to drive through Manteca to get to Escalon. The water pump gave out in the car downtown and it must have been at least 103 degrees outside it was hot! I met Bill Peters that day he managed the El Rey, he helped us push the car into the El Rey parking lot. He called his mechanic to come over and fix it. He even let me and the kids come in for free and watch a movie while the car was being fixed. It was air conditioned and so nice to sit in, the cushions on the seats in the loge were so plush and comfortable. The stage had beautiful red velvet curtains with gold trim and tassles on the sides. Beautiful murals and what caught my eye were the light fixtures on the ceiling, very unusual looking but very elegant. I never forgot Bill Peters kindness, and I used to mail him my homemade fudge. He sent me a couple of passes, but unfortunately I never got to use them (i still have them) because about a year later, it caught fire. I will always remember that day at the El Rey. Even my kids mention it still.

I am working on a project to open the former El Rey Theater in Manteca as a restaurant again. Our concept is one of a market style dining experience. In addition to the steak and pasta restaurant, We plan to have a pizzeria/bbq/burger bar, wine club and tasting room, full-service meat and fish market, cheese market, coffeehouse, and greenhouse operation. We are calling it Old Cinema Markets. Like us on Facebook. We are still seeking principles and investors. Contact Tim Cooney at (209) 275-1040 or for more information.

If you restored the old marquee and the cascade, that would certainly add the authenticity of the experience. I’d go there!

The El Rey has a new life, as a event center and a banquet hall called “The Veranda”. The interior has been completely remodeled and looks elegant. Be interesting to see if the theater building will maintain the reputation of being haunted. Good to see that it is in use again.