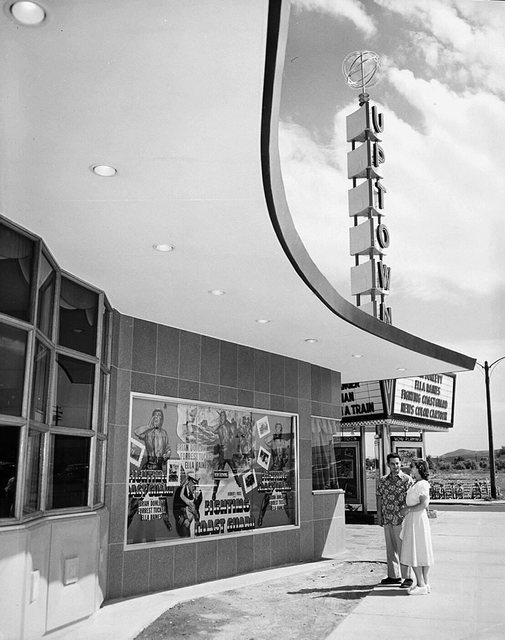 The Uptown Theatre served Richland, WA from 1950, and into the 1970’s when multi-plexes came to town, it was history. January 5, 1970 has the X-rated "Midnight Cowboy" playing.

In 1983 it was expanded to three screens.

The entry for Walla Walla architect Henry Brandt Gessel in the 1955 edition of the AIA’s American Architects Directory lists the Uptown Theatre in Richland among his designs, and gives 1950 as the year of the project. The Uptown was mentioned in Boxoffice of August 19, 1950, which said that it was soon to open and would have 1,250 seats.

Yeah, they always know how to ruin a Grand old Theatre with more screens,But it was either that or close,I know.

First movie I saw here was “Indiana Jones & The Temple Of Doom”. Also saw “Spies Like Us”, “Brazil”, and “Showgirls” at the Uptown.

Here’s a photo from Flickr with the construction of the theater, June 5, 1950: http://www.flickr.com/photos/idyllopuspress/3433277309/in/photostream/

A look at an indoor display inside the Uptown for the film “Little Egypt”. Upon walking into Uptown, this would have been to the wall on the right side. In the 80’s and early 90’s, the wall would have been lined up with two or three stand-up arcade video games. http://www.flickr.com/photos/idyllopuspress/3434080940/in/photostream/

A couple checks out the poster for “The Fighting Coast Guard”, starring Brian Donley and Ella Raines at the Uptown Theater in Richland, 1951.

The Uptown Theatre is now the home of a church with the rather unchurch-like name Eastlake Tri-Cities. Here is the map from their web site.