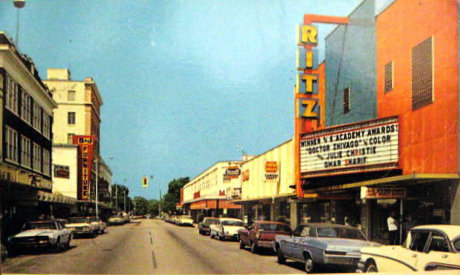 Opened in 1925 as the Williamson Theatre in the heart of Winter Haven’s business district, the theater was originally designed for both live stage shows and motion pictures.

Inside, the auditorium held a balcony, a small orchestra pit, dressing rooms and an organ.

It was remodeled in 1932, and also renamed the Ritz Theatre, and became strictly a movie house from then on.

In the 1950’s, high school students with an ID card could get in for 15 cents to see a feature, though regular admission was only a dime more.

In the mid-1980’s, the Ritz Theatre shut its doors after almost 60 years of continous opearation. However, in 1989, it was reopened, less its auditorium seats and its floor made level as a teen dance club called Off Limits. Within a few years, the club also closed, and the Ritz Theatre remained empty until 1997 when the non-profit group The Ritz Theatre 100, made up of concerned citizens determined to save and reopen the historic theater, bought it.

In 1999, the State of Florida awarded the group a grant of nearly $250,000 to begin the restoration of the Ritz Theatre, while meanwhile, the drive to raise more funds for the theater continues.

It is hoped the theater will be reborn as a venue for film, performing arts, children’s theater and civic and religious events.

“Inside, the auditorium held a balcony, a small orchestra pit, dressing rooms and an organ.” Is the organ still there?

And thank you, State of Florida for the money grant to help restore this theatre for future generations to enjoy! I know after being a member of Cinema Treasures that they all can’t be saved, but this one will be! :–)

The curved ‘window’ in the old photos of the Ritz reminds me of the curved ‘signature’ window in the now demolished Tivoli in Mishawaka Indiana that was recently taken down by a mean wrecking ball! If I ever find myself in Mishawaka Indiana I will stand before that former theatre’s location and have a moment of silence THEN pay the Mayor a visit!

Here is an old photo with the Ritz marquee:
http://fpc.dos.state.fl.us/frisbie/fr0720.jpg

TC: Thanks for the vintage Ritz photo.

From the 1940s, a postcard view of the Ritz Theatre and Central Avenue in Winter Haven.

A picture of the theater when it was the Williamson: View link

(Bob Swift is a resident of Winter Haven.)