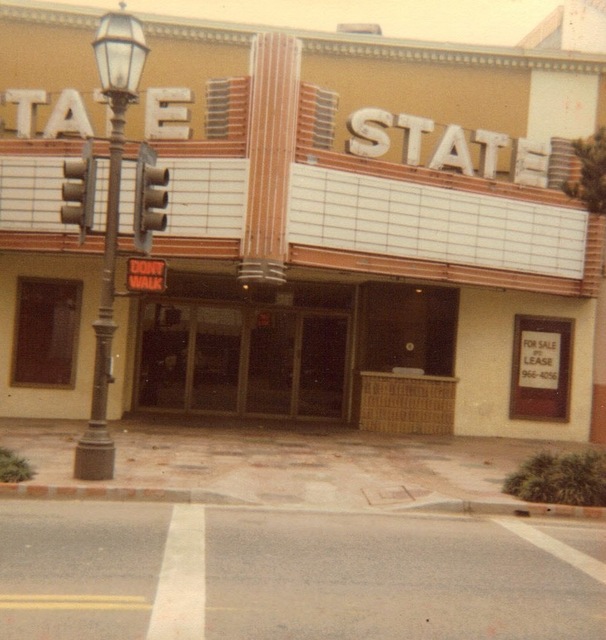 I believe it was built in the early-1940’s, across the street from the Granada Theatre in Santa Barbara.

In the 1980’s, it was gutted and the seating area was transformed into a arcade. In the late-1980’s/early-1990’s, it was converted again into retail stores and a recording studio, erasing all traces of its movie past.

In the late-1990’s what was left was razed and permanent retail stores were built.

City directory lists it first in 1942, at 1219 State Street (but you know how malleable these street addresses were over time). It closed around 1981. The Rose Theatre was at 904 State Street and was last listed in 1931.

A Unity Shoppe thrift store now resides at this address.

During its time as a video arcade in the early 1980s, the moderne styled marquee with abundant neon remained intact.

Southwest Builder & Contractor’s issue of June 23, 1939, carried an item saying that Clifford Balch was preparing plans for a remodeling and expansion of the State Theatre at Santa Barbara. Work was to include a 57 foot extension at the rear of the building.

The August 29, 1941 issue of SwB&C mentioned that the owner of the State Theatre was, at that time, Earl O. Calvert. Calvert was also the owner of the Lompoc Theatre in the Santa Barbara County town of Lompoc, and a few years later opened the La Mesa Theatre there, as well.

No photos? Man there must be hundreds of STATE THEATRES, I know LOEWS had many named STATE>

I worked at the State Theater in the early 60s while attending Brooks Institute of Photography. I remember one night Fess Parker came in to watch a movie. It was a great job while going to Brooks. Anyone else work there?

I visited Santa Barbara a couple of years ago and it looks McDonalds is on this site now. I wish I could remember the name of my boss back in the early 60s. I really enjoyed working there.

Anyone work at the State Theater in the 60s? If so please email me. I have a question

1967 photo added courtesy of the AmeriCar The Beautiful Facebook page.