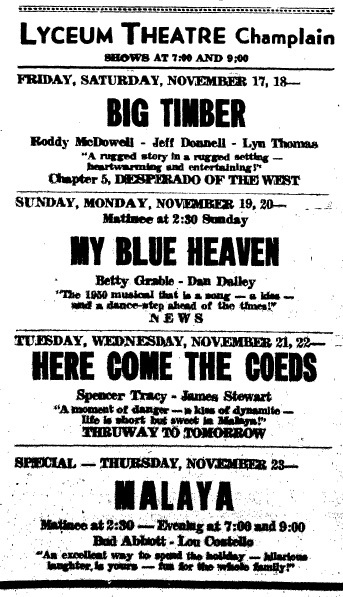 The Lyceum Theatre opened in 1923 at 7 Oak Street. It was remodeled in 1931. Around 1950, the theatre was relocated to 127 Elm Street, in a Quonset Hut style building, where it remained in operation until December 23, 1957 when it closed with “Curse of Frankenstein” and “X for Danger”.

Can somone check and see if this building is a Quonset Hut? From the Map and the aerial photo the building looks like a Quonset Hut. The U.S. Navy developed the Quonset Hut in World War II. That somehow makes no sense with opening in 1923. Sorta seems neat for the American Legion to meet in a Quonset Hut.

I sent a note to the local historian asking if the theatre might have had more than one location. I’ll let you know when I get a reply.

The mystery of the quonset hut is solved. A long time resident of Champlain, Celine Paquette tells me that the original location for the Lyceum was at 3 Oak Street, in a building now occupied by the Knights of Columbus. In the early 50’s the theatre relocated to the quonset hut building at 127 Elm Street(the American Legion hall). She did not know when the theatre ceased operation.