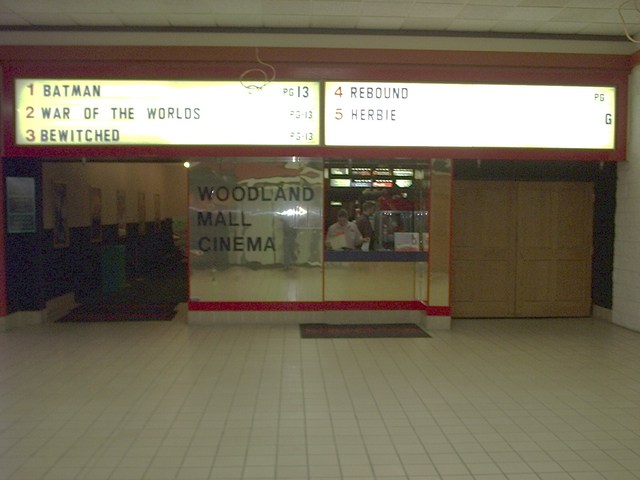 The Woodland Mall was built in 1986/7 on the city’s Northside. The Mall’s grand opening was May 15, 1987 and the Woodland Mall Cinema 5 launched within a week on May 20, 1987 with three of its five screens operating. It featured, “Ishtar,” Beverly Hills Cop II,“ and “Blind Date.” “American Ninja II” launched screen IV two days later. The city and its college students were delighted to have an option in addition to the downtown, single-screen Cla-Zel Theatre.

In November of 1989, Cinemark took on the five screen location. As leases expired and retail conditions deteriorated, the Woodland Mall shedded stores and anchors spiraling into greyfield status, a term akin to a “dead mall.” But Cinemark just kept on going continuously until March 17, 2020 when the Woodland Mall Cinema was closed along with theaters around the globe due to the COVID-19 pandemic.

On July 16, 2020, Cinemark made the closure permanent as the Woodland Mall 5 became one of many theaters closed permanently during the pandemic. Cinemark wrote:

“Cinemark hereby informs you that as the date of this letter we will be vacating the premises and returning possession of the premises to Landlord. Cinemark does not make this decision lightly, but given the unprecedented and tragic circumstances, Cinemark has made this difficult decision. As you are aware, Cinemark faced a particularly acute challenge stemming from the COVID-19 outbreak due to the various local, State and Federal mandates specifically requiring the closure of public motion pictures. While such mandates were wise and prudent given the situation, it unfortunately resulted in economic hardships for Cinemark that ultimately led to this decision. Cinemark has enjoyed serving this community over the years and appreciates the Landlord’s efforts in connection with the Woodland Mall.”