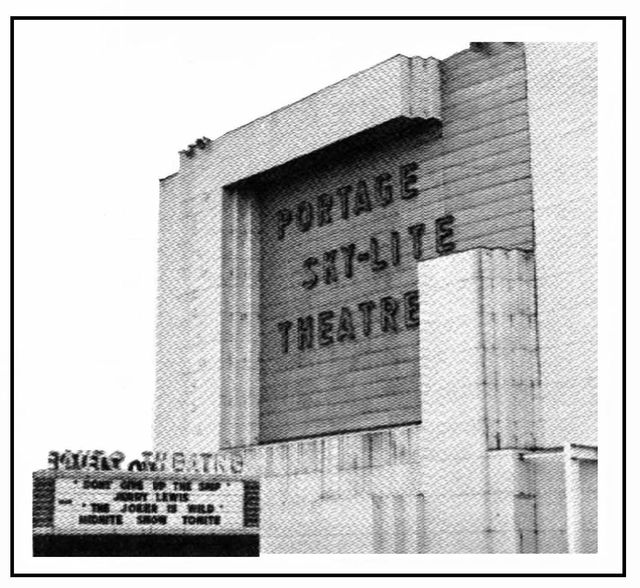 The Jack Armstrong Circuit was the manager of all the Schwyn Theatre properties. It had a capacity for 538 cars. The screen size measured 41 feet by 52 feet. It also featured a dance floor for those who wished to dance before the movie began. An additional feature of this theatre was a playground for the kids to keep them occupied. Mr. Schwyn died in 1967. The Jack Armstrong Circuit took over control of the properties after his death. The Portage Sky-Lite Drive-In finally closed in 1986. The drive-in theatre was demolished and a self- serve storage unit was built on the property.

I lived in Cygnet from 6th grade through my Junior year of High School. We went to the Portage drive-in theatre many times over the years. I remember watching “Poltergeist” there as a teen. It really freaked us when we came home to our house to find all of our closet lights on, though we knew for absolutely sure we had turned them off. We later found out my uncle was in the closets measuring for carpet that he would lay for us later. If you don’t understand the light thing, just understand the nasty spirits started in the closet! :)

I worked for Armstrong Circuit at Portage Drive In. I later became Supervisor for the company. I had the chance to buy The Portage Drive in for $39,000.00 when Carolyn Hatch threw the company into bankruptcy. She offered it to me, however my wife and I owned a restaurant at the time and were strapped for cash and I was also working as a Disc Jockey in Toledo, all while working for Armstrong Circuit. I could have kicked myself hundreds of times for not having the money to buy it….LOL.

Carl Schwynn built the Portage Drive in with the help of Otto Johnston who had been crippled with a leg injury in Carl’s oil fields in Cygnet. Otto would manage the theater until his death in 1965. I had worked for Otto and his wife Gladys at the theater. Jack Armstrong and his wife Dorothy and daughter Carolyn would work at the theater also in the early 60’s even as they were owners.

Jack Armstrong was General Manager for Carl Schwynn theaters and would later buy Carl out.Jack had started in Napoleon Ohio as a projectionist, using the old Nitrate film. Jack Told me once a film had got caught in the gate of the projector and went up in flames. He acted quickly grabbing the reel and throwing it out the window of the projection booth before it caused any real damage. But he said that film was very volatile, and that was why safety film is used today. He would become manager and later own the Napoleon theaters.

Carl Schwynn and Jack Armstrong both admired Otto Johnston and respected him and his expertise. I remember once a manager from one of Jacks out of town theaters told Mr. Armstrong that Otto had misspelled a word on his Marquee. Jack blew up and said I DON’T CARE IF OTTO SPELLS EVERY WORD WRONG ON HIS MARQUEE, HE CAN DO WHATEVER HE WANTS. And that was that…LOL

Frank Nickens managed the Cla-Zel theater in Bowling Green and was also a writer for the Sentinel-Tribune newspaper in BG. Frank did a cartoon called “OTTO SEZ” in honor of Otto Johnston and it appeared in the Tribune everyday offering little witticisms. A typical print might say something like, “OTTO SEZ IF YOU EAT THE HORSE YOU’LL BE AS BIG AS THE HORSE” Of course I made that up, Franks were more witty… :–)

I told Mr. Armstrong once after Otto’s death that he should change the name of the Portage Drive IN to the OTTO JOHNSTON DRIVE IN THEATER. Jack responded with that was a good idea, however he had thought of just changing the name from PORTAGE DRIVE IN THEATRE TO THE PORTAGE DRIVE IN OTTO THEATRE. However neither of names were ever implemented obviously.

The Portage drive In had country artists perform on top of the concession stand in the 50’s. Such stars as Little Jimmie Dickins, The Browns etc. I had signed checks that were endorsed by the Artists, when we cleaned out the storeroom of the Drive In. I lost those to a fire however later on.

The company’s warehouse was located at the South end of the Drive In and still stands today. All the popcorn, candy and syrup for the Coke machines were stored and delivered to all the Armstrong theaters and even other companies that bought from Jack Armstrong’s company.

I delivered to all those theaters while being assistant manager of the Drive in and warehouse, working with the late Bill Herring, my boss who was General Manager of Concessions and Supervisor for the company. Bill was a workhorse, and I admired him greatly. As I said, later on I also became supervisor of the company replacing Bob Tilton who developed Diabetes and went blind.

Portage Drive In was sister or brother to the Cla-Zel and Stadium Cinema’s in Bowling Green.

What is left of the Armstrong Circuit is owned and operated today by Jim Walters who owns Great Eastern Theaters of Toledo. Jim is a native of North Baltimore Ohio and son of Ernie Walters, an old friend of mine also, who was partners with Jack Armstrong and owned the Virginia Theater in North Baltimore.

Just uploaded some pictures from of Earl Sharninghouse (Earl 64)