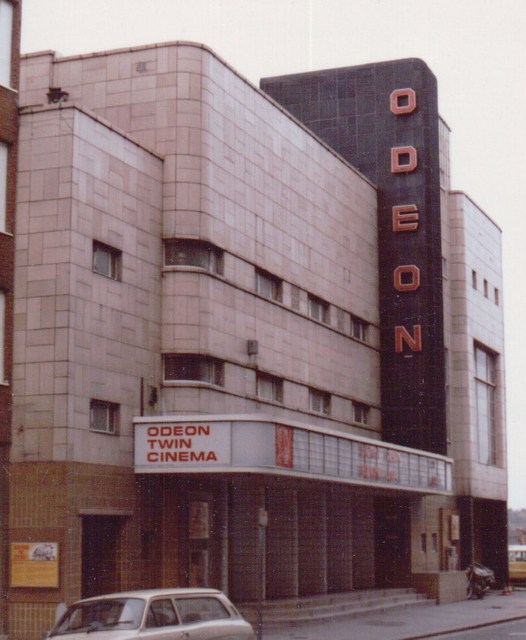 The Odeon was one of the original cinemas in the Oscar Deutsch chain of Odeon Theatres Ltd. Located adjacent to the Palace Theatre, just off the town centre. The Odeon opened on 8th March 1937 with Sabu in "Elephant Boy". The exterior was in a sleek modern design, covered with cream faiance tiles and featuring a tower feature, which was covered in darker coloured tiles.

Inside the auditorium seating was provided for 1,210 in the stalls and 494 in the circle. Lighting in the auditorium was via a series of troughs across the ceiling which contained concealed lighting. The Odeon boasted a large car park at the rear.

The Odeon was given the Rank Organisation’s infamous ‘zing’ treatment in 1967, which removed some of the internal decoration. In April 1979, it was twinned with 400 seats in the former circle and 600 seats in the former stalls. The car park land was sold off for redevelopment. In 1989, the stalls auditorium was subdivided to provide two 221 seat cinemas, thus creating a triple screen Odeon.

The Odeon was closed on 25th November 1999 with "Sixth Sense", "Fight Club" and "Blair Witch Project". It was demolished in 2002, and a housing block and offices (containing a Job Centre Plus), known as ‘The Picture House’ was built on the site.