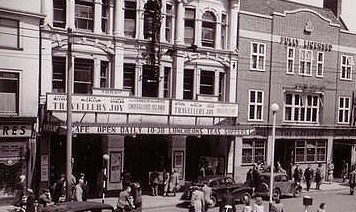 The Vaudeville Electric Theatre was a purpose built hall, located behind existing premises, with an entrance through a former shop. It opened in July 1909, and had a seating capacity for 500. It was extended in 1912 and the seating capacity was increased to 1,000.

In 1919, the noted architectural firm Emden & Egan were employed to produce plans for 1,500 seat cinema. It was built around the existing building which kept operating, and only when building work was completed was the original building closed and demolished.

The new Vaudeville Theatre opened on 26th September 1921 with Mary Pickford in "Pollyanna". The huge auditorium had a barrel vaulted ceiling, with seating arranged on stalls and circle levels. There was also an ‘old English’ style tea room which had wood paneled walls.

It was re-named Gaumont on 23rd February 1953 and was closed by the Rank Organisation on 30th November 1957, with the Gaumont name being transferred to the former Pavilion Cinema in 1958. The Vaudeville/Gaumont was mostly demolished apart from some outer walls, and it became a Timothy White’s store, in later years becoming a branch of Boots the chemists.