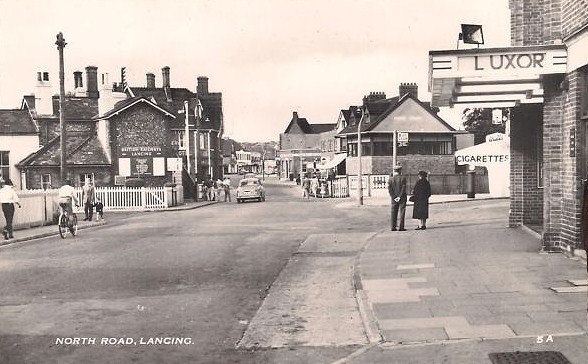 The Luxor Cinema was situated on Station Parade, South Street, opposite Lancing Railway Station. It opened on 17th January 1940 with The Crazy Gang in “Frozen Limits”. It had a brick frontage with a central tower and the name ‘Luxor’ on the top parapet. A central entrance to the cinema had shops on either side.

Seating was for 998, with 800 in the stalls and 198 in a steeply raked circle. The proscenium opening was 36 feet with a stage depth of 20 feet and three dressing rooms. The latest Westrex sound system was installed.

Occasional stage shows had ceased by 1957 but films lasted until 26th June 1965 with Natalie Wood in “Splendour in the Grass”. It then became a bingo hall which ran successfully until the early-1980’s, when that too ceased. The auditorium was demolished and flats built on the site.

The frontage remains the same with the Luxor name still in situ and the shops still open and the former foyer became a carpet showroom (now a Mobility Centre) retaining the staircase up to the circle.

There is a vintage and contemporary views of this theatre on this webpage: scroll down about two-thirds of the way: http://www.bn15.co.uk/history/cinema.html. Each will enlarge if clicked upon/.

The projectors were Ernemann, made in Germany. They were the last pair shipped to England before the war. The chief operator was a Mr Frank Chipperfield. Sir Sydney Samuelson CBE started working there as a rewind boy when the cinema opened. He went on to become the first British Film Commissioner.

At first the shops on either side were not opened due to shortage of materials. The space was used for posters. Sir Sydney Samuelson CBE told me he would put up posters after the doorman, who did the job, was called up.