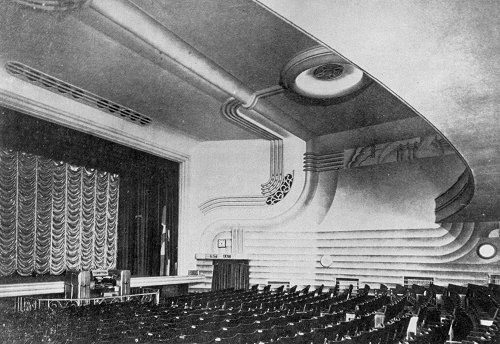 Built for and operated by the independent Colmore Entertainments chain, the Regal Cinema was opened on 19th September 1938 with Bobby Breen in "Make A Wish". The brick building had a modern style, with a central feature on the facade clad in reconstructured white stone, with large windows allowing light into the circle foyer. The auditorium had seating provided for 1,046 in the stalls and 372 in the circle. The proscenium was 40 feet wide, the stage 15 feet deep and there were three dressing rooms. The cinema was equipped with a 2Manual Compton Theatrone electronic organ, which was opened by organist Leslie Taff.

The fully equipped stage was well used over the years. Part-time bingo was introduced in 1963, and the final films were screened on 1st February 1964; Steve Reeves & Gordon Scott in "Duel of the Tians" and "The Ringer".

The Regal Cinema was immediately converted into a full time bingo club. In 1965, the Compton Theatron electronic organ was removed, due to difficulties in obtaining spare parts, and a Bird electronic organ was installed to entertain the bingo players at intervals. The bingo club was closed in 1993, and in April 1994, the empty building was badly damaged by fire. The building was demolished in late-1995.

There is a picture of the interior of the Regal on this webpage (scroll down about three-quarters of the way to see it): View link