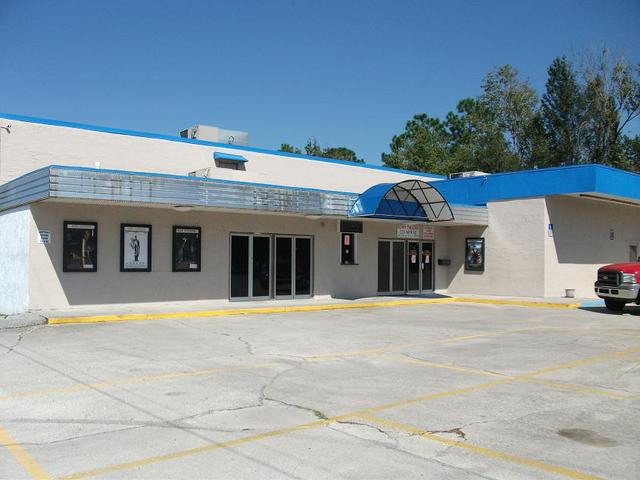 The Perry Theatre is the only theatre left in town and the only one in this area of the state. While its name implies a one-screen theatre, it actually had three screens. It appears that it was only open on Friday and Saturday nights, as well as Sunday afternoon, with one showing of each movie per day. The Perry Theatre was closed on January 8, 2018 and was sold in July 2019. Plans for its future are unknown, but it will not be a movie theatre.

1985 Floyd Theaters of Haines City, Fla., Carl Floyd President, they had 40 theaters, all in Florida.

Here are my pictures from February 2011.

For sale on loopnet.

Yes, Perry Theatre has 3 screens. The ownership changed from McClary on April 2, 2012 to local resident Larry Schmidt and his wife Teresa, (having moved to Perry FL in July 2005). McClary indicating the failing health of his mother and desire to return to Indiana to be near her as the reason for the sale. The Schmidt’s renovated the lobby and concession area in the first year and held a Grand re-opening on Oct 12, 2012. Pictures before and after the renovations can be found on the theater web site www.perrytheatre.com Both owners (McClary and Schmidt) state they tried being open more than the weekend, however the local population is not sufficient to cover the overhead of being open more often and ditched the effort on several occasions. IF the theater can find a way to undertake the digital conversion Schmidt says he will try again with a skeleton crew. The theater does also have a Facebook page https://www.facebook.com/Perry.Movie.Theatre

Some news regarding this triple theatre: Two digital projectors were installed this month (May 2015). The third cinema room is still running 35mm. Began presenting live entertainment in the fourth room, which was used as a game room many years ago. Their new web site is www.perry3.org * Ownership history and changing of hands, according to Joe Brownlee, a local resident who worked at the Perry theatre in 1984 and assisted with the recent digital install: Floyd Theatre, Teresa Batten, then Robert (Bob) Long, then Holly (Long) & husband Daryl Longley, then James McClary in 2000, and most recent Larry & Teresa Schmidt in 2012. The architect drawings for the building are dated July of 1979 according to the current manager Mr. Schmidt.

This theatre officially closed January 8, 2018. Another casualty of the movie industry’s digital conversion mandate. The building and property was sold recently, (July 2019). The new owner indicated it will not be reopened as a theater. Interestingly, one of its last patrons was former President Jimmy Carter, his family and SS entourage, who were visiting the area during a fishing excursion in December 2017. If you’re wondering what they watched, it was Star Wars; The Last Jedi.