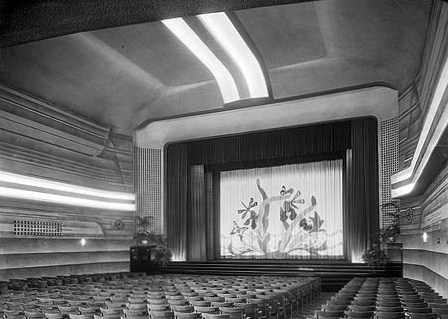 The Victoria Hall was opened on 17th December 1888. It had seating for 900 in stalls, balcony and gallery levels. The stage was 30 feet deep and there were 4 dressing rooms. It was first used as a concert venue, but eventually presented variety shows, which later included Bioscope film shows. The Victoria Hall closed on 9th April 1920 with the play "The Lowland Wolf".

It was converted into the Victoria Picture House, which opened on 23rd August 1920 with Mary Pickford in "The Ragamuffin" & "Wild Waves and Women". Seating was now provided for 860 and it had rear projection, with the projection box being located on the stage. The Victoria Picture House was closed on 25th April 1936, after being purchased by the Oscar Deutsch chain of Odeon Theatres Ltd. in late-1935.

The building was gutted and remodeled in an Art Deco style both externally and internally, to the plans of architect Harry Weedon, with interior decorations by Mollo & Egan. Seating was now increased to 1,090, with 740 in the stalls and 360 in the circle. The projection box was now located in the rear of the circle. It re-opened as the Odeon on 19th September 1936 with Eddie Cantor in "Strike Me Pink". In March 1951, the World Premiere of "The Browning Version" starring Jean Kent was held at the Odeon.

The Odeon was closed by the Rank Organisation on 29th October 1960 with Norman Wisdom in "There Was A Crooked Man". After a year standing unused, it was converted into a Top Rank Bingo Club, which opened on 8th November 1961.

The bingo club closed in 1972, and the building was sold to the council for redevelopment. It was demolished in September 1974, and in 2011, a branch of Boots the Chemists stands on approximately the site.

Is this possibly the ‘Kettering’ as mentioned over the railway station announcements in “Brief Encounter?”. I never tire of that classic picture!

Ah….One of my local cinemas when I was a lad. I think the screen tabs were unique, as I’ve never seen any other Odeon with tabs of the “dragonfly” design. The Mollo and Egan airbrush paint job on the walls had been obliterated by a redecoration scheme some time in the ‘40’s (I think) as I can only remember the place having a plain light brown interior. I loved the lighting troughs and I think these point to being the work of Robert Bullivant of the Harry Weedon office.

As was usual with most Odeons, no organ was ever installed, although one manager claimed that there were chambers. Odeons with organs were very few and far between, as Oscar Deutsch looked upon them as very expensive, unnecessary luxuries, only to be installed when there was competition nearby. Of course, Mr Deutsch may have been worried by the magnificent George Coles Regal being constructed at the same time, only a short distance away. And that ended up without an organ as well! (But a nice 3 manual 12 rank Compton with an illuminated surround would have made the Regal the perfect cinema!)