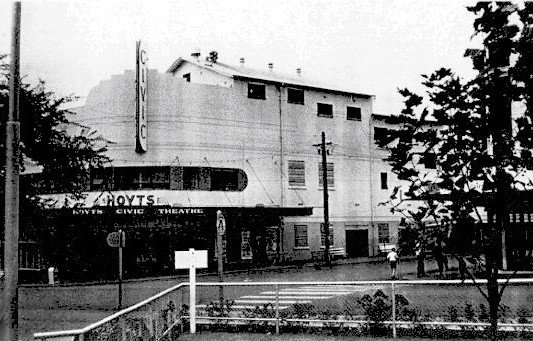 Located in the south-western Sydney suburb of Bankstown, at the corner of South Terrace & Restwell Street. The Majestic Theatre was opened in September 1915. All seating was on a single level. It was rebuilt in 1924, with a balcony added, providing a seating capacity for 1,330. This work was carried out my architects Morrow, de Putron & Gordon. It re-opened as the New Majestic Theatre on 18th August 1924 with "The White Tigar" and "No More Women".

It re-opened as the Civic Theatre on 14th August 1940. The theatre had been re-modeled in an Art Deco style by architect G.N. Kenworthy. Seating was provided for 1,180 in stalls and circle levels.

Taken over by Hoyts Theatres chain in 1944. Hoyts Civic Theatre was closed on 2nd June 1965, but briefly re-opened in early-1966 to screen The Beatles film "Help!". It was demolished in 1970 and a supermarket was built on the site.