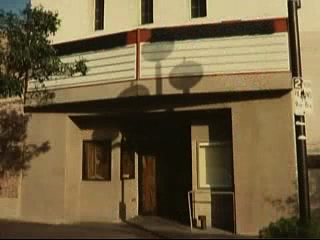 The Temple Theatre is located on the first floor of the Masonic Temple building, which was constructed in 1928 to the plans of architect Arthur George Lindley of architectural firm Lindley & Selkirk. Construction was completed in 1929. It opened as the Temple Theatre in 1934. It was renamed U.S. Cinema on March 21, 1980 and this closed in 1985 when it reopened as Regency 2 Theatre, operating into the 1990’s.

I poked my head in and chatted with one of the A Noise Within people, and she said the original movie theater was right behind the red, theater-looking doors on the first floor, just past the mini-lobby with a chandelier inside the entrance doors, with staircases to each side of the lobby going to the other floors. My significant other, who grew up in Glendale, can’t remember ever having to go up stairs or an elevator to get to the U.S./Regency 2, although his memory of it is hazy, since he usually went to the Capitol or Roxy. (Actually, he’s vaguely remembering that before the Sands became the Regency I, it’s possible that there were briefly two theaters, Regency I and II, both inside the Masonic Temple building, possibly creating the small theater space now used by A Noise Within, although he’s really not sure about that.

So anyway, is it certain that the main theater was located on the upper floors?

And why isn’t the Regency 2 name even listed as an a.k.a. for this? It was called that for some time, and was the only name I ever knew it by (although I never went there, as it had the reputation for being a dump). I thought the most recent name of the theater was always used as the primary name, but it’s not even listed at the top.

AND WHAT HAPPENED TO THE LISTING FOR THE SANDS/REGENCY 1?? It’s still standing at 210 S. Brand just down the block from this, now used as a restaurant/banquet hall, but it completely disappeared from Cinema Treasures. I’m positive it used to be listed, but it’s been deleted. Why??

I’ve seen that banquet hall marquee many times. I always wondered if that was a theater.

I drove by the Masonic building the other day. There is an old ad for the California Bank on one side wall. Here is a 1940 photo from the USC archives:
http://tinyurl.com/cvnwnz

This theatre was also known as the Regency 2 Theatre when Pacific Theatres operated it. The theatre was located on the ground floor of the building.

Interestingly enough, there’s no sign of a theatre yet in these photos from the California State Library. It claims these are circa 1927, and let’s hope the links work:

The earliest Glendale city directory listing I can find for the Temple Theatre is 1940.

Here’s a .pdf of the restoration proposal for the building:

It gives the history: The Masonic Temple was built for in 1928 for the Unity Lodge, which was founded in 1905 and grew over the years through various consolidations, building an earlier lodge on the same Brand Boulevard site in 1914. The subject building was designed by Arthur George Lindley of the local firm Lindley & Selkirk, which also designed the Alexander Theater in 1925. The property was listed as Glendale Register No. 15 in 1997.

In 1934,‘ a movie theater, the Temple, was built inside the Mason’s auditorium at the lower floors, with theater use continuing under different names through the early 1990s.

The building was also known as the “Unity Temple”. Arthur Lindley seems to have visually “unified” the various floors of the main façade of the building by designing continuous vertical ribbons of windows. To give greater grandeur and height to the building, which stands 105 feet at the top parapet, he designed a series of steps, chamfering the edges, which recede back and toward the center.

When completed, the former Masonic Temple was the tallest building and had the largest auditorium, the fastest elevator and the largest enclosed space in the City of Glendale.

So, 1934 then. No real info on the proposed use of the former movie theatre space, just a little bit about the lobby.

And Bill’s page on the Temple

also links to the full “The Monolith” Flickr set

which includes these recent interior views showing the Temple/US/Regency 2’s auditorium and balcony:

and this is the old projection room being used as a wig department for the Noise Within theatre group: