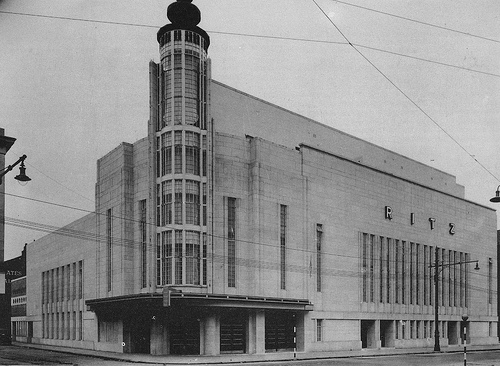 Located at the corner of Claughton Road and Oliver Street. The Ritz Cinema was built for and operated by the S.M. Super Cinemas Ltd. chain, headed by Southan Morris. It opened on 4th October 1937 with Robert Taylor in "The Man in Possession, plus a stage show, and organist Rowland Tims opened the Compton 4Manual/11Ranks organ which had an illuminated console located on a lift in the centre of the orchestra pit. Film star Gracie Fields was there to officially delare the cinema open.

The exterior was in white Portland stone, and there was a 70 feet tall glass and steel frame tower above the corner entrance. There were almost 2,500 seats located in stalls and circle levels. The side-walls had modernist murals, and there were troughs across the the ceiling which contained concealed lighting. The proscenium was 56 feet wide, and there was a fully equipped stage, which was 75 feet wide. There was also a cafe.

On 21st December 1940, after the presentation of Linda Darnell in "Stardust" & Florence Rice in "The Girl In Room 313" had ended, organist Harold Hunt was keeping the audience entertained as there was an air-raid outside. The Ritz Cinema was severely damaged by a German bomb which came through the roof, exploding just in front of the circle. It killed 10 and there were over 100 casualties. A second bomb had shattered the rear wall of the building. The front of the building and foyer areas were untouched.

The building lay in a semi-derelict state for several years, until after the end of World War II, when in July 1946, local Birkenhead architects M.W. & W.M. Shennan were employed to draw plans for the renovation of the cinema. A second-hand Christie 2Manual organ from the La Scala Cinema, Glasgow, was purchased to replace the badly damaged Compton organ. It had been reconditioned by Wurlitzer.

The Ritz Theatre was re-opened on 13th January 1947 with Fred Astaire in "Blue Skies", plus a stage show featuring Billy Cotton and His Band, and organist Robinson Cleaver playing the Christie organ.

The Ritz Theatre was taken over by the Essoldo Cinemas chain on 26th August 1954, and was re-named Essoldo. It was closed on 5th January 1969 with Boris Karloff in "The Body Snatcher" and Glenn Langan in "The Amazing Colossal Man".

It was converted into a Ladbokes Bingo Club, later operated as a Top Rank Bingo Club, and closing as a Mecca Bingo Club in early-November 1997. It was demolished in September/October 2000, and the land is now used as a car park.

A picture of the theatre as a Top Rank Bingo centre: http://www.flickr.com/photos/stagedoor/333996478.

A set of vintage photographs of the Ritz Cinema, and some demolition photographs:
View link

The photograph of the Compton is quite similar to Southampton’s ABC Forum… so pretty with the coloured lights inside and such a unique “Melotone” sound.

Does anyone know what bands played at the Plaza (B-Head) in the 1960s. Did Marmalade doe a gig there and does anyone know if the Hollies did a gig there? Dates as well please if possible? Kind Regards, Scouser from the one eyed city:)

“Billy Fury” Started his Career here… The supporting act did not turn up.. He had asked to see the Promoter to see if he could get future work.. He was auditioned in one of the Exits.. Hmm Ended up n stage that very night.. and the rest is history..

During the period when the cinema was the Essoldo talent competitions were held between the B. Film and the feature film. On one particular evening the acts taking part comprised of two skiffle groups, a classical pianist and various other acts. The names of the groups were the Black Denim Boys and the Quarrymen.Latterly Duke Duval Rockers and The Beatles. The winners of the competition were the Black Denim Boys not as one would have expected the Quarrymen ( this part of the Beatles story seems to have been overlooked), although they went on to do very well didn’t they. The Duke Duval Rockers subsquently played in some very well know venues which included the Cavern Club and the Liverpool Empire with the great Jim Dale. At this time it was thought there was some kudos appearing on the Essoldo the stage being wider than Liverpool Empire.

Anyone with info/photos who remember the Polish guy (possibly the doorman or foreman), he worked in all from the late 40s – Ritz, Essoldo and then the Classic.

Stumbled on this site having heard of the death of Bobby Vee who I remember appearing at the Essoldo when I was a teenager. I just wanted to get a fix on the date and find it was as long ago as 1962. I remember it well as the same night I crossed Argyle Street and went into the Majestic (another old cinema and now a Chinese Restaurant!) to see The Beatles! Not a bad night especially as (due to family working in the Majestic) I met them all in the Managers Office during the 2 sets they did.

I also seem to remember seeing Roy Rogers and Trigger and I’m sure it was at the Essoldo – anyone confirm it for me? I think it was about 1955'ish! Bloody hell I’m getting old …