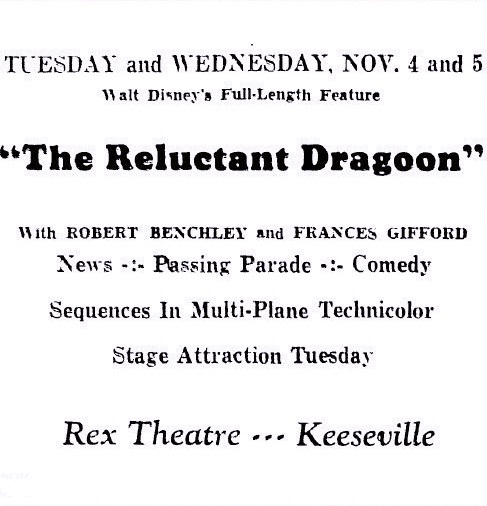 The Rex Theatre was located in the Bond block on Bridge Street. It occupied about a third of the lower floor. It was remodeled and reopened in 1938 as the New Rex Theatre. In 1939 the management announced plans to remodel the entire lower floor for their use.

After the expansion the theatre, once again known as the Rex Theatre, seated 450 patrons. It reopened in October 1944. In October of 1954 a Cinemascope screen was added to the house. The first picture on the new screen was "The Robe".

The Rex Theatre was owned for many years by Paul and Pearl Maicus.

A double feature of "Snow White and the Seven Dwarfs" and "C'mon Let’s Live a Little" were the last films shown at the Rex Theatre on October 1, 1967. The building was then used as an auction house until 1972. It was destroyed by fire on July 7, 1973.

thanks Gregg for getting this theatre on,Odd a Disney and another non-Disney on a Double feature. I assume “C'MON LET’S LIVE A LITTLE” is not a Disney film.

You’re right, it’s not a Disney film. It is described on IMDb thus:

The people that wrote reviews on the IMDb site all seem to agree that this movie is hilarious, without meaning to be.