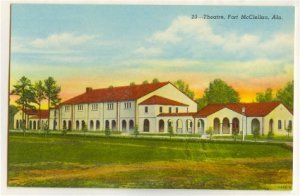 Unfortunately I do not recall the actual dedication name for the theatre, but it was operating prior to 1941. The AAFES theater was open until Fort McClellan inactivated in 1999. The building still remains, but I could not located any listings that would indicate that the theater was still open for business. Fort McClellan is currently in the process of transition and clean up so as to be turned over to State of Alabama. The National Guard still maintains a presence on the old post.

I remember this theater from my brief official visit to Fort McClellan in 1989. At the time Fort McClellan hosted the US Army Chemical and Military Police schools. I had driven from Fort Stewart, GA to the US Army Chemical School at Fort McClellan. My stay was for less than 24 hours and I was billeted in a tiny apartment in a collection of buildings on the wooded hill south of the theater. It was a rainy Thursday afternoon in early April. After I checked into my quarters I walked down the hill (having done enough sitting during the six and a half hour drive to Fort McClellan) and found the AAFES Theater near the intersection of 12th Street and Summerall. IRON EAGLE II was scheduled to play that evening. I saw the original IRON EAGLE and was not even aware that there was a sequel (Years later I was even more surprised to discover there was an IRON EAGLE III).

Rather than sit idle all evening in my cramped guest quarters I opted to see IRON EAGLE II. I decided to drive to the theater that evening because it started raining steadily. The theater was typical of the brick and cinderblock theaters of the day. As I recall there were not too many patrons at the theater, which worked out well as it rained with Biblical intensity and those of waiting for the place to open were able to take cover under the overhang. AAFES theater managers/projectionists had a habit of showing up in the nick of time immediately before the advertised showing of the scheduled film. That night was no exception.

Because of the rainy weather the inside of the theater had a damp and stale locker room aroma to it. It was not until the air-conditioning kicked on that the fragrance abated.

I do not recall anything extraordinary about the interior of the theater. Despite the frequent flashes of lightning and theater shaking under each clap of thunder the picture continued uninterrupted. The unfortunate thing was that IRON EAGLE II was such a bomb that I kept nodding off during the show. Fortunately the heavy rain ended by the time the movie let out.

Fort McClellan was another casualty of the base closures and alignments of the late 1980â€™s and 1990â€™s that resulted in the closures of many military facilities. Even those that remain open have much less to offer active duty military, Guard and Reserve or retirees. The theater at McClellan was also one of those casualties.

I was stationed at Ft McClellan from 1974 to 1975. The theater was across the street from the bowling alley. Like all Army theaters, it didnt cost much to see a movie and it was a nice place to go on a Saturday night. Behind the theater was where couples could go for some private time as there was a nice quiet flower garden.