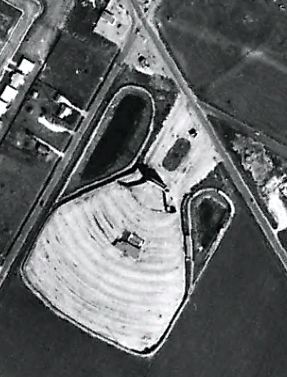 The Osage Drive-In was opened in 1951 and operated until 1960. A 1961 aerial shows the theater in the process of being demolished. By the 1970’s, a cluster of car dealerships was built on the site.

Address: 4841 Staples at Everhart (4801 S. Staples today) | Capacity: 550 cars | Opened: Thursday Mar 16, 1951 | First Feature: “Frenchie” starring Joel McCrea, Shelley Winters | Owner / Builder: Chester Kyle and Lester Miller | Closed: Monday Sep 5, 1960 (Last ad in Caller) | Currently (2010): Frost Bank and BMW of Corpus Christi | Chester Kyle was part owner of the Kinsgville drive-ins with a different partner. He opened this drive-in in Mar 1951 and surprisingly sold out to Corpus Christi Theaters a little more than 6 months later. This would be the first drive-in for CC Theaters who held all of the many indoor theaters in Corpus. They closed down for several weeks in the Spring of 1952 while they remodeled and upgraded this very new theater adding a train track around the perimeter for their new attraction, a replica of the Missouri-Pacific streamliner “The Texas Eagle”. The ad logo changed from the Indian Chief’s head to The Texas Eagle Train. The grand re-opening was May 8, 1952.