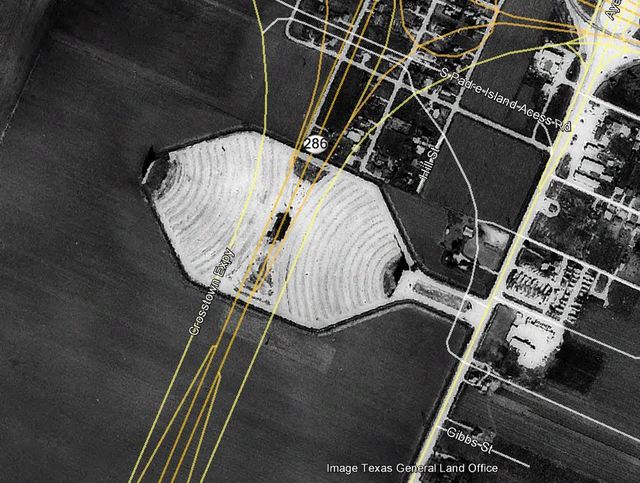 A two-screener dating from 1957, the Viking Twin Drive-In was open until 1980. Interestingly, Highway 286 was built through the middle of the drive-in’s lot in the mid-2000’s, but the rest of the lot remains vacant.

It should also be noted that the Viking Twin, Buccaneer, Gulf and Surf drive-ins all existed within a two-and-a-half mile stretch.

The Viking Twin Drive-in opened Aug 11, 1957 at 5333 Ayers St, Corpus Christi, TX 78415 by Johnny Blocker who also opened The Twin Palms and The Surf. It was the last drive-in to be constructed in Corpus Christi. It held 1400 cars, 700 on each screen, although the grand opening article said it had speakers for 2000 cars and additional seating for 500 patrons. It was also operated by Rowley United and United Artists over the years. It closed in 1981.

Yakima, thanks for sharing all the stuff. I actually added all the Corpus DI’s just so you could do that.

My dad managed the Viking Twin. Before that, the Surf and Twin Palms for John Blocker back in ‘55. When Mr. Blocker built the Viking, he offered dad a new gig—manager for this wonderful theater. Dad was big on Ballyhoo and would often stage “Drive In Theater Premieres”. He once brought Diane Ladd to the Viking for the opening of a Roger Corman biker film.

I was 8 years old when I got my first very innocent kiss, on the playground of the Viking. It was bestowed on me by the owner’s daughter, Vicki Blocker.

Sorry ‘bout the late response, I don’t visit this site that often….but to answer Drive-In 1954, many of the photos we had from that era were lost in a fire. In addition, My mom and dad are both deceased, so that’s not a source.

Jim, what was your father’s name? I worked there from 1970-73 in the Concession stand and weekends at Sap-O-Rama a swamp meet during the day at the theater.. The managers at that time were Mr. Farmer and Mr. Tovis.

I have written a book about The Viking Twin, a coming of age story that will be published soon. My best friend and I worked there fin the concession stand from 1970-73. We attended South Park Jr. High and then Mary Carroll High. I really miss that theater, lots of wonderful memories…