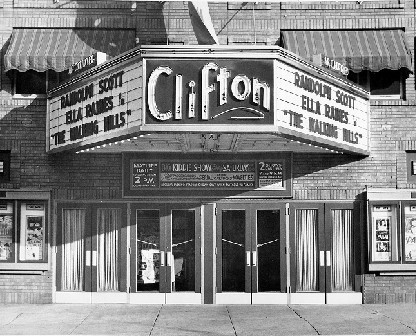 Clifton Theatre was opened prior to 1914. The theatre was still open in 1957. The building still exists at the corner of S. Penn Street, for many years in use as a moving and storage company office. By 2021 it is in use as a barber’s shop.

There is no way this theater closed in the 1970’s. I grew up in Clifton Heights and it was not there even in the early 60s'. It is interesting to see the theater.

I’ve lived in this area since the early 50’s and I don’t remember this theatre, I do know where this building is.

I checked, the movie on the marquee “The Walking Hills” came out in 1949!

A building permit for a moving picture theater at Clifton Heights was issued to a J. A. Simmons in 1920, but there is evidence that the Clifton Theatre was in operation prior to 1914. It is possible that the permit was for an expansion or rebuilding of the Clifton, or it might have been for a different theater that we do not have listed.

The pre-1920 existence of the Clifton Theatre is indicated by an article in Film Bulletin of November 13, 1934, about a church-led boycott of all movies that had been going on for five months, leading to the bankruptcy of several independent theater operators in the region:

“Perhaps the most pathetic situation is the case of Jim Dick, of the Clifton Theatre, Clifton Heights. For more than 20 years Dick had been supporting himself and family from earnings of the little Clifton Heights theatre. A bank crash took his savings but he continued to eke out a slender existence from the theatre. Along came the Ban cutting his receipts almost in half, causing him to lose his theatre and leaving him and a family of seven destitute.”