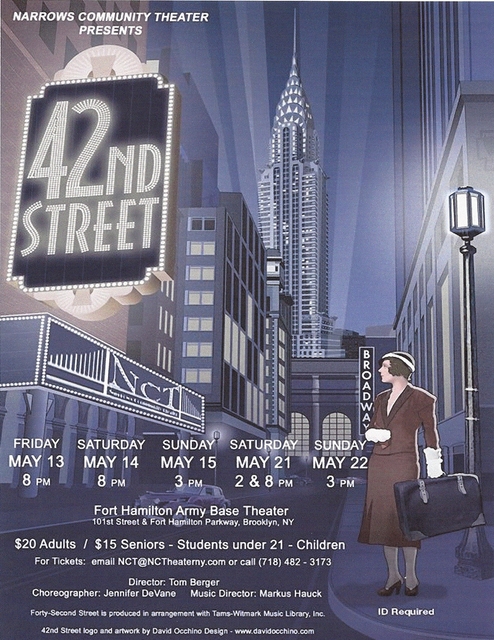 As part of an active US Army Garrison, the Fort Hamilton theater is a mixed-use facility, hosting live concerts, community performance, and town meetings. The theater features one screen and was used as an AAFES (Army and Air Force Exchange Service) theater for a time, hosting films on Friday, Saturday, and Sunday evenings (with the occasional Saturday matinee).

Currently the theater is the permanent home for the Narrows Community Theater, who are allowed to use the theater for free in exchange for offering acting workshops to the military families.

Second-run movies were shown on Fridays, Saturdays, and Sundays. There was one showing a day, at 7:30pm (though they occasionally had a matinee screening Saturday morning for children’s films). Sometimes they would show the same movie two days in a row, depending on popularity. G-rated films were shown on Fridays, R-rated movies were usually reserved for Sunday evenings. The theater was not well-cleaned over the weekend, so it would get pretty messy by Sunday. The theater usually put out a flyer every month detailing the movie (and other events) schedule for the month; the front was laid out in a calendar format while the back eventually featured descriptions for each film.

There is a box office but I’ve only ever seen it used once or twice; instead the staff member on duty rolled a cash register out into the lobby and took cash at the door. I don’t remember the exact ticket prices, but it in the range of $2-4, with reduced prices for kids. I don’t think they checked IDs for R-rated movies; I remember seeing a few R-rated movies like Face/Off by myself or with my younger brother.

There was no snack counter; on the right side of the lobby there was a soda machine and 1-2 snack machines, along with a change machine. My father had a popcorn popper, so he would usually fill a gallon Ziploc bag with fresh popcorn that we could take with us.

As a mixed-use theater that also hosted concerts and other performances, the Fort Hamilton theater had a full stage with a curtain. The curtain was usually closed and would be opened at the start of the show, and the screen also had to be lowered down.

Like most other theaters, they showed trailers before the main feature, for films that would be shown at the theater in the coming months. The trailers were bookended by the Star-Spangled Banner and the AAFES theater welcome announcement. The anthem was accompanied by footage of troops and vehicles in action, both combat and non-combat scenarios. The film changed a handful of times while I lived there, with a new recording of the anthem and the footage decidedly less aggressive (or so it seemed, I remember films that were heavier on shots of West Point graduations and female technicians working at a console as opposed to shots of tanks rolling over ridges and troops firing weapons).

The AAFES announcement was the standard “the exits are located on the left side of the theater, please throw out your trash, and smoking is not permitted in this auditorium” type of stuff.

The theater sometimes held other events during the week or on weekends; these occasions were pretty rare. If there was an event on a Saturday or Sunday, the movie showing for that night was almost always cancelled. Every year the theater held a holiday concert featuring (I think) the 26th Army Band.

The back of the theater faced Sterling Drive (south) and was used as an office for Americable, the cable provider for Fort Hamilton and many other military installations. They don’t seem to exist anymore (except in Japan). The office was pretty small, with a single door leading into a tiny room containing a counter on the left side, and a door straight ahead leading into what was presumably some kind of “back office” (probably the dressing rooms for the theater). Being right across the street was definitely handy at times, as whenever something was wrong with the cable, my mother would just send me over there to complain in person!

Lee Avenue and General Lee Avenue are the same thing on-base, it’s really about how much they feel like squeezing onto the street signs (take a look at the Google Maps, parts of it are just labeled “Lee Avenue”). If you really want to get pedantic, it’s actually “General Robert E. Lee Avenue”. However, it is absolutely correct that the Street View is absolutely wrong.