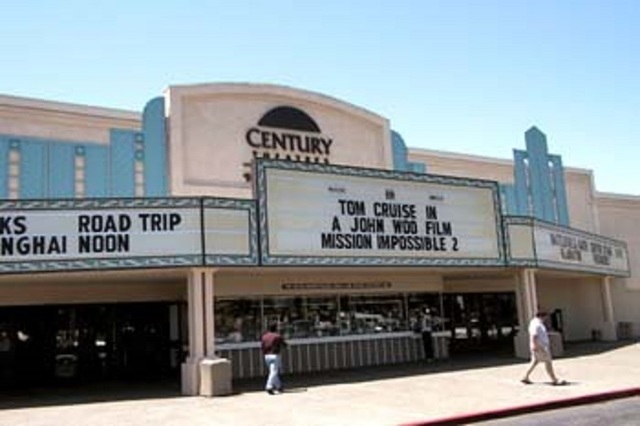 Was built in 1994 to stave off AMC opening a theatre in the Edenvale area of San Jose. Century made efforts to build, but kept getting put off by members of the San Jose City Council, who wouldn’t change the zoning in the area to allow for a theatre. AMC expressed interest in building in the area, in a location the city preferred. Finally, in a middle finger to the City Council, they built the Capitol 16 on the Capitol 6 Drive-in property—already zoned for a theater.

I don’t know that this was the last theatre Rainey designed, as Century Folsom, Roseville and Rancho Santa Fe opened after the Capitol 16 — all VERY similar in design.

Is there anything on the old theatre site now?

@Scott Neff: “completely designed…” meaning, inside and out. Folsom and Roseville were designed by Rainey, but the interior was done by another company. Vastly different from any Rainey designs (i.e. they looked much better than Rainey’s dull interiors).

Unfortunately Cinemark has chosen to close Roseville (Eureka Rd/Lead Hill) across from Kaiser to open the newer Galleria Mall futher west with the same amount of screens and more control (it’s in the middle of the mall) SOOOOO no more domes for Sacramento! All that’s left is Century Mountain View (relic) and Cinedome Henderson Nevada (fossil). Too bad! I pass by thd Winchester domes and thd church (Century 24) all the time. What a waste!🥺🥺

Century Folsom and Laguna still have their domed multiplex theaters.