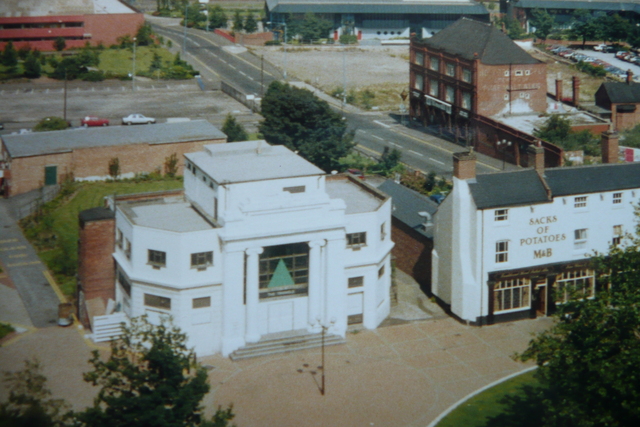 The Delicia Cinema opened on 5th November 1923, next to the Sacks of Potatoes Pub, in the Gosta Green area of inner Birmingham. At the time, the neighbourhood consisted of streets of back to back housing. Around 1930 it was equipped with a Western Electric(WE) sound system.

After the war, the area was cleared of housing and replaced by what would become Aston University. The cinema closed and was taken over by the BBC for use as television studios. The BBC remained until their new Pebble Mill studios opened in 1971.

Aston University took over the empty building and used it as an arts centre, later housing the Birmingham Arts Lab in 1976. In February 1983 the Triangle Arts Centre, a small brick box type building was built to the back and side of the main building and eventually became the Triangle Cinema (it has its own page on Cinema Treasures). At some time the main auditorium of the former Delicia Cinema was demolished, leaving the distinctive frontage. However, Dillons (later Waterstones), opened a bookstore in the frontage.

The building was empty from 2003, and was to be redeveloped as a waste-fuelled power plant. However it was taken over by Aston University and converted into their European Bioenergy Research Institute. The front of the Delicia Cinema building survives.

Dave Harte posted a video he made in 1988 of the Triangle Cinema, including shots inside the original auditorium, then set out for University exams.

His blog entry and the video directly on Youtube.

Now part of Aston University, the facade has been retained with a new build behind, housing a research establishment for renewable energy sciences.

Is the building triangle shaped(3 sided)?

The Triangle Cinema was not in that building