Someone from a blog called What’s Up Atlanta writes that they called Regal and that they were told that Tara has not closed for good. Actually, if you read exactly what they were told it is ambiguous and could be interpreted either way. In fact it is probably a boilerplate press release with only the name of the theater in question to be filled in should anyone inquire. I would bet that the final decision has yet to be made and it will not be until things start to return to normal at some undetermined point in the future.

A lot of these permanent closings that are being announced are the result of leases that are approaching their end. I do not know who owns the land or even the building for this theater or what the status of that is. What anyone in this area does know is that this intersection sits in a very desirable location and that it could easily be redeveloped into something that would bring in more income in one day than the theater would in a month.

Jack, I never had any involvement with 12 Oaks after Loews left town so I am not the one who did not hire you. Since it was Storey whoever it was did you a favor. With Eastern Federal gone from the area they were probably the worst company to work for at least among the major chains.

I was stunned when Lefont decided to close the Fine Art in that I erroneously believed there was a large enough market to sustain a single screen enterprise devoted to non mainstream fare. The closing of the Tara marks the end of an era. Even the screens in the split auditoriums of the Tara are larger than those in most of the IMAXs in multiplexes.
Sam, I think we have met. I applied for a post at the 12 Oaks back in the 1980s.

Honestly, for the last decade every time I saw there was a fresh post about the Tara I was afraid it had been closed. It is hard the believe that somebody like Regal can justify it running in the day of 12+ being the norm but it will be a shame if it is true.

Just saw a post on the Buckhead Natives FB page stating that this location has closed for good. The proof was a picture of the marquee that said We Are Closed. Of course that could mean just closed for Covid but the way Regal, Cinemark and especially AMC are announcing so many permanent closings you have to wonder about the prospects for this old theater that opened 52 years and two weeks ago as a deluxe 1000 seat 70MM single screen.

First movie I ever saw here was Marooned. I have never been able to determine if it was in 70MM but the last movie I saw here, Amadeus certainly was.

Four screens were better because there was so much wasted space, either too close or too far with two screens. I never liked movie “halls”. For some reason I want to say it had 3 screens at one time and I thought that was the best. Caligula played here, rated X, to much media fanfare. I saw Star Wars and Blue Lagoon here. 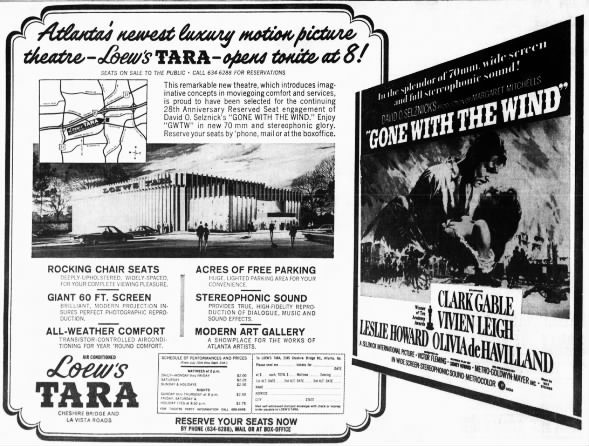 Thank you same for the correction and update! A great piece of vintage 1960’s era cinema architecture. Would be great to see the original screen back in place.

Yes, 35MM mono of course despite the side it was in having 70MM equipment. The other side had “The Deep” so it was a good summer for Loews. By the time it opened they knew it would be a big draw so they built a second concession stand in the corner of the lobby opposite the rest rooms. Obviously they knew where the real money was made.

Forty years ago today, “Star Wars,” after five weeks of playing in other markets around the country, finally arrived in Atlanta, opening here at the Tara (and at three suburban locales). The movie would go on to play at the Tara for 25 weeks. Any Cinema Treasures members see it here?

The source of all things Tara resides in Sandy Springs…the one called George Lefont. He took over operation after Loews folded and built the third auditorium, ground up, in the late 1970s, early 1980s. George also had the left auditorium divided into two during the 1980s as well.

Forty years ago today, “Smokey and the Bandit” opened at the Tara (and nearly 400 other cinemas in the South and Southwest regions of the United States). And here’s the link to a new retrospective article which details the cinemas in which the movie played and many other tidbits about the popular movie.

In which year was the fourth screen built?

Fell in love with this theater last December when I was in town and saw Room there. Hope it lasts forever.

First movie I saw here was The Gods Must Be Crazy, back in 1981 or 1982. It had played there for nearly a year (maybe more), and one Saturday my daddy said we needed to see what the fuss was about. So we trekked from the suburbs to the Tara.

I remember seeing a midnight advanced screening of Pulp Fiction here in 1994. It had won the Palm d'Or and everyone was so excited. I thought someone would get trampled when they open the doors.

Worked here in 1996 and 1997. Helped run the booth and worked concession. Good times.

Here’s an idea: reconfigure the original building to bring back the original screen by moving back the walls of the front two auditoriums. The original screen would out IMAX IMAX. Install stadium seating in all four of the auditoria. The larger screen could be used for screening 70mm classics like Lawrence of Arabia, Aliens, Patton and of course, Gone With the Wind. This would make it one of the best art houses in the USA and insure that it remains a viable operation for another 50 years. Just a thought…

Went here in December to see Room/ Loved the theater.

This theater is very interesting. It is very very small. The tile work is very amazing. But, if you want to see a new movie you will be out of luck. This theater only shows independent and small release films. Movies come here before they get released to “ Straight to DVD ” They also play special editions an director cut films here. Sometimes it is even closed for private screenings. I myself have only been here a few times * count on one hand * But I know if you like running into famous people this is the theater in Atlanta to goto.

Remember the Tara, while living in Atlanta in the early seventies my wife and I saw “The Sting” here, great movie, seems it was a single screen theater then, so glad the Tara is still in business.

That is AWESOME, thanks for posting. GREAT article. Too bad the theatre isn’t like that anymore. Well, at least it’s still open, chopped up though it may be. Back in 1969 seeing a 70mm film at the Loew’s Tara was a real event.

This theater is now all-digital projection. The projection is quite poor in auditorium 2, however, because of the angle of the room and the configuration of the projector — the picture is so askew it’s practically diagonal. Hopefully that can be fixed. Other auditoriums look good.