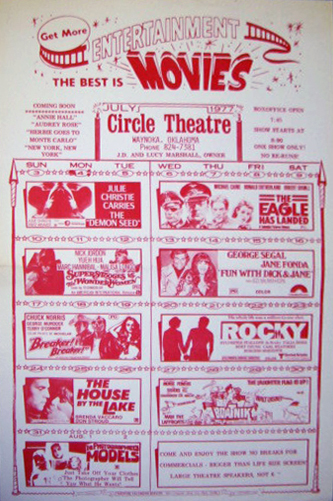 Opened prior to 1950. Following its closure as a movie theatre in fall of 1981 it reopened briefly in 1982. Waynoka’s Circle Theatre became a live theatre. In the late-1990’s it was converted into a retail store which closed in 2010. In 2011 it became Mike’s Variety store. That had closed by 2017 and another store had moved in.

This should be listed as closed since it’s now a retail store.

Circle Theater closed in the fall of 1981. It reopened for a few weeks during the summer in 1982, some of the movies featured were Porky’s, Star Trek II: The Wrath Of Kahn, Grease 2 and The Cat People. It then closed permanently with the exception of a free single showing of the film Tex at Christmas. In Jan 1983 projection & sound equipment was removed. For the next 15 years the auditorium was used as a community live theater and for the annual Miss Waynoka pageant. In the late 1990s the building was remodeled and became a Duckwalls retail store. It closed in 2010. The store reopened in 2011 as Mike’s Variety which has since gone through several name changes under the same owner. As of April 2020 it is still in business although a “store closing” sign is displayed in the window.