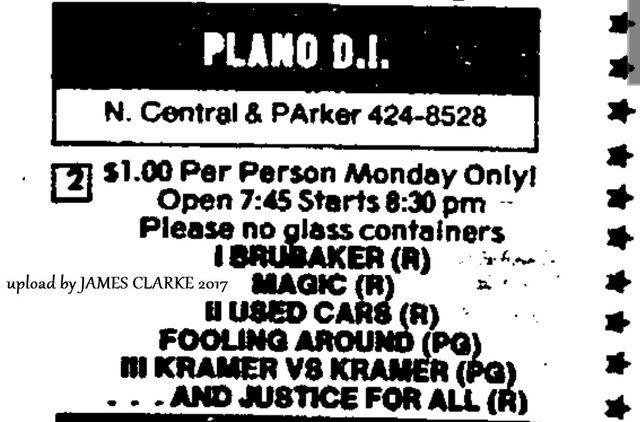 Located on the northeast corner of US-75 and Parker Road. Opened August 1, 1969, this drive-in theatre closed in 1985. It was initially one screen, but two more were added in 1970. It was closed in 1984 and has been demolished. The area is now a shopping center.

Approx. address for this drive-in was 3300 North Central Expressway.

Veteran theater owner Bob Davis constructed the single screen Plano Drive-In in 1969. The theater was at the northeast corner of Parker Road and Central Expressway / U.S. 75. That caught the eye of the McLendon Theater Circuit which had recently purchased the Downs Drive-In in Grand Prairie and would convert it to the renamed, multi-screen Century Drive-In in 1970. The circuit had also converted the single screen Garland Road Drive-In into the three-screen Apollo Drive-In. McClendon took over the Plano retaining its moniker but converted it to a three-screen operation. At that point, McLendon also operated the Astro, Apollo, Gemini, Century, and East Main in Grand Prairie as their DFW ozoners.

This appears to be a 15-year lease situation common to land speculation of that era as Dallas' suburbs were moving northward. When former department chain Mervyn’s expanded into Dallas in 1984, they hosted a big event at the Plano Drive-In, the last major event at the Plano Drive-In. In 1985, the drive-in became home to overflow parking for the nearby Collin Creek Mall and the Dallas Area Rapid Transit (DART) Park ‘n’ Ride allowing commuters to take express busses into Dallas. DART was working on building a mud-free / paved and modern transit center across the street on the southeast corner. Under their aegis, the drive-in was damaged in 1986 and actually repaired despite the fact that the facility would never be used for theatrical purposes again.

The DART center finally was completed in 1989 and the Drive-in was vacated. It was demolished and became home to a nondescript strip shopping center at 3300 N. Central Expressway that in the 2010s housed stores such as Ross Clothes for Less, Petsmart, and Sports Authority. To go back in time, a visit to historicalaerials.com and inputting the 3300 Central Expressway in Plano, TX in 1979 gives you a great look at the former three screen operation.