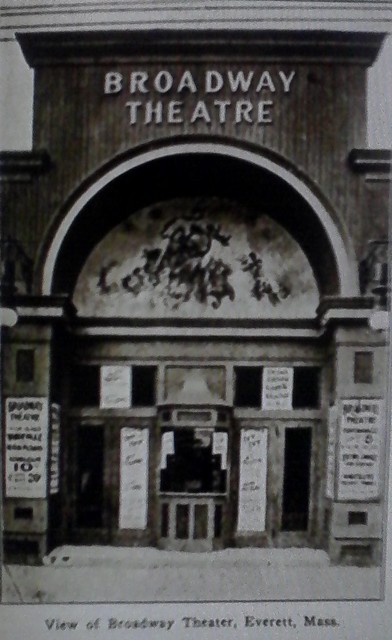 The Broadway Theatre opened on February 8, 1909 with 392 seats. It presented two shows a day consisting of films and vaudeville acts.

During July 1909 it was remodeled and seating was increased to 610. The green and gold auditorium had 8 chandeliers and 8 panel paintings on the walls. There was a pianist and a violinist in the orchestra pit.

The June 12, 1909, issue of The Moving Picture World said that the Broadway Theatre in Everett had changed hands. N. Parentin and G. W. Vaughan had sold their interests in the house to C. F. Rollins, who planned to make improvements.

The Broadway in Everett was profiled in the Nov. 11, 1911 issue of Moving Picture World trade magazine. The article says that the stage was 15 feet deep, and that the projector throw to the screen was 82 feet. The image on the screen was 12 feet X 15 feet. Shows consisted of 3 vaudeville acts and 4 one-reeler films. Matinees at 3PM and Evening shows at 8PM. The basic admission was only 10 cents, but one could buy reserved seat tickets for slightly more.
There is a facade photo showing the entrance about 2 stories high with an extension above with the theater name on it. There was a centered box office with a double door on each side and the almost obligatory half arch above. The doors and box office were one step up from the sidewalk.

On a list of Massachusetts theaters and function halls receiving state licenses for the 12 months ending March 31, 1914, there are two theaters in Everett: the Crown Theatre (which later became the Park), and the Broadway Theatre. The condition was “Good” and the Manager was M.C. Brown. However, that may be a typo because the Manager as of 1911 was a N.(Nathan) Brown.

There are 5 movie theaters listed for Everett MA in the 1927 Film Daily Yearbook: the Capitol, Modern, Broadway, Rialto and the Strand (ex-Crown, later became the Park Theatre). Of these 5, all except the Modern have pages here in Cinema Treasures. The Broadway is listed as having 850 seats instead of the 610 it had as of 1911. This suggests that either it was enlarged, or the 1927 Broadway was a different theater than this one.

The profile article about the Broadway in Moving Picture World magazine of 11/11/1911 states that the projection booth was 9 feet X 6 feet and that they had installed a new Powers 6 projector on Sept 1st. It was fitted with a Grundlach-Manhatten lens. Note- only one projector, not a pair. The auditorium had 7 exits.