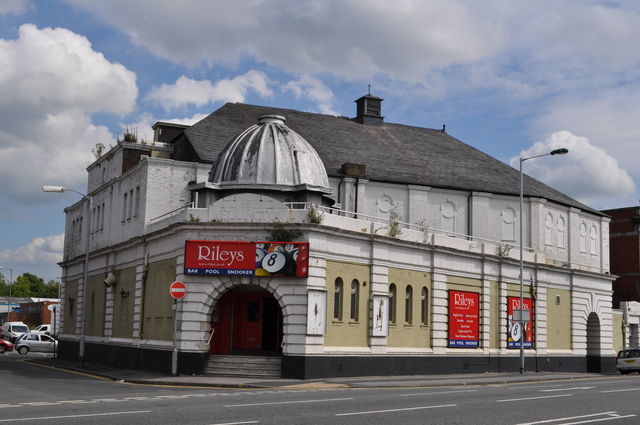 Located to the south of Stockport city centre at the corner of Wellington Road and Higher Hillgate. The Wellington Picture House was opened on 11th July 1921 with Hay Foxhall in “Only a Mill Girl”. The corner entrance has a dome, which was originally topped by a cupola. Seating in the auditorium was provided in stalls and circle levels. The proscenium was 28 feet wide. The Wellington Picture House also contained a 13-table billiard hall and a cafe.

Independently operated, it was last operated by the Essoldo Cinemas chain who took over in 1948. Bingo was introduced for one day a week in 1961, and the Wellington Cinema was closed on 31st August 1963 with Hayley Mills in “Pollyanna”.

It was converted into a full time Essoldo Bingo Club, later beoming a Ladbrokes Bingo Club, and finally a Walkers Bingo Club. In recent years it has become a Riley’s snooker hall, which closed in 2012. Local campaigners are trying to raise 500 Pounds to have a Blue Plaque placed on the building.